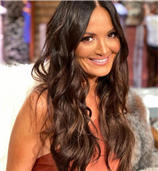 With all of the Reunion talk about Jen Shah and Lisa Barlow, one could almost forget that Jennie Nguyen was fired for racism.

Despite initially fumbling her scandal, Bravo made the announcement in January.

But now, Lisa Barlow says that she thinks that Jennie deserves a second chance. Why?

Sometimes, people who are suddenly famous find that bad jokes from a decade prior come back to haunt them.

It’s difficult to “explain” the edgy humor for the late aughts, and sometimes bad faith actors weaponize that against a famous person who mildly annoys them.

Jennie Nguyen’s racism scandal was not that.

Jennie’s alarmingly long list of vicious, racist posts were extremely recent, and it’s hard to argue that she was just “joking.”

In an endless string of posts in 2020, she posted anti-Black memes, blamed Black Americans for being murdered by police, and spread provable lies about George Floyd’s murder.

Try as she might, Jennie speaking her “truth” did not really win people over.

TMZ spoke to Lisa Barlow at LAX, asking her about how she feels about Jennie these days.

Lisa shared that she has not heard very much from Jennie in recent weeks.

She does, however, wish her well.

Additionally, Lisa claimed that Jennie’s firing has been “hard” on her and her castmates.

She took things even further, saying that she supports giving people second chances.

While that is often a good philosphy, Lisa is taking it to the extreme where she would apply it even to Jennie, even so soon.

The first major issue with this is that, usually, accepting that someone has changed requires a genuine belief that change has taken place (obviously).

Hatred and vitriol take time and dedication to unlearn. Jennie filmed last season just about a year after her racist posts.

The second major issue is more about Lisa, in that she is … not the person to be lending Jennie any “grace” right now.

When the Black community is targeted with anti-Black racism and vitriol, it is not anyone else’s place to say who is forgiven or accepted.

For that matter, no one person can speak for an entire race or ethnicity. Lisa’s not the one to offer Jennie a second chance.

Of course, as TMZ‘s initial report noted, there may be a reason for which Lisa is feeling the urge to forgive and forget.

We all very vividly remember her intense, off-the-walls rant about Meredith Marks and Meredith’s entire family.

It was one of the wildest hot mic moments in the history of the franchise.

Lisa confirmed to TMZ that she knows that she has a long road ahead before she can mend fences with Meredith.

Lisa also vowed that she will not repeat this particular mistake again.