Liam Hemsworth posed up a storm for the cover of ‘Men’s Health’ magazine, and went barefoot while rocking a white tank top and black pants.

Liam Hemsworth, 31, was seen posing in new, behind the scenes footage from his cover shoot with Men’s Health Magazine Australia. The publication’s editor, Scott Henderson, shared a never-before-seen video of the Hunger Games star in action on the set. The IG stories, which were posted on June 25, showed the Aussie hunk posing in a white tank top, which highlighted his bulging biceps. Liam also rocked black pants and went shoeless for the Malibu shoot, which took place in 2020.

Other footage showed the A-lister wearing a pink shirt and a pair of skinny jeans, and later a black tee with olive green jeans. In the cover story, Liam opened up about the impact exercise had on his life, particularly following his high-profile split from ex-wife Miley Cyrus. “This last six months, honestly, for keeping my head level and just stay balanced, I’d say exercise has been big for me,” he said at the time.

Liam has since moved on with model girlfriend Gabriella Brooks, 23, and the pair recently made their first official public appearance. They stepped out at the star-studded Gold Dinner on June 11 in Sydney, almost 18 months after they were first linked. The couple, who initially sparked romance rumors in December 2019, attended the event in support of the Sydney Children’s Hospital, alongside Liam’s big brother, Thor star Chris Hemsworth, Elsa Pataky and Matt Damon‘s wife Lucciana Barroso. 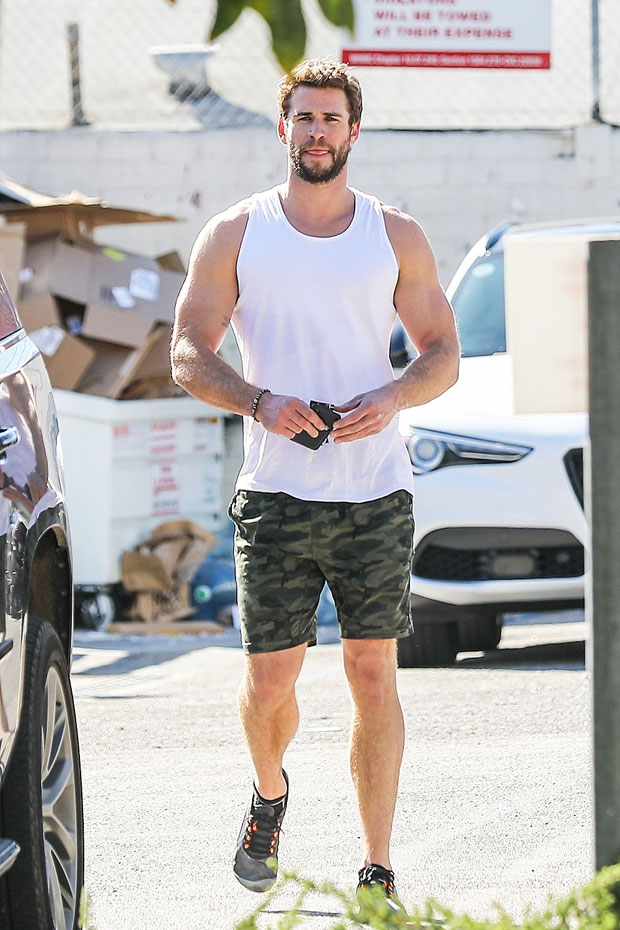 “Fantastic night raising much needed funds and awareness for one of the most important and challenging issues, children’s mental health,” Liam captioned his Instagram snap, showing the group smiling together. “Thank you @itsmondotcom for hosting the evening and all you do for the Sydney children’s hospital @sydney_kids #golddinner.”

The actor posted a group shot, putting the ladies’ gorgeous gowns on display, along with a selfie with Gabriella. The very private pair only appeared to confirm their relationship in 2020, when they were spotted kissing on an Australian beach, proving he had moved on from Miley. The former couple got married in 2018, after they lost their Malibu home to a fire, however the marriage was short-lived, and they divorced just eight months later.