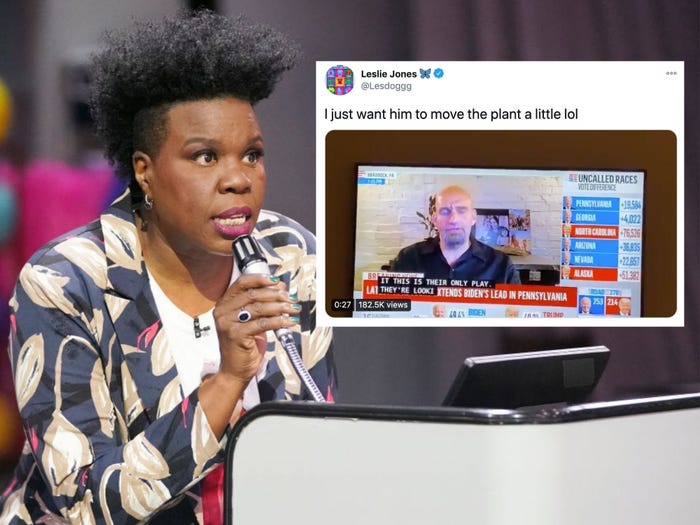 Leslie Jones seemed to be having a field day with the cable news coverage of the 2020 presidential election.

Since Election Day, the comedian, TV host, and former "Saturday Night Live" star took to Twitter to share videos of her watching and commenting on coverage from news networks, particularly MSNBC.

Jones offered her two cents on the home decor of contributors who video-called into the newscasts. Her tweets ranged from unsolicited — but lighthearted — decorating advice to comical commentary on the strange ability of video calls to give viewers a glimpse into strangers' homes.

For example, Jones likened one MSNBC contributor's home — based on the portion of the background — to a haunted house.

"Is that a haunted house?" Jones said in the video. "What is that mason jar doing back there? Is that to catch the damn spirits?"

Sometimes, her comments were simply complimentary.

In a video of an MSNBC broadcast she tweeted early Saturday morning, Jones said: "I like a dude with blue curtains. Something about those blue curtains is making me really like this dude. I don't know what it is."

Jones said that she "kind of liked" another contributor's video-call background.

"You can tell the room is probably beautiful because it's a white brick wall, he probably redid it, that looks like some kinds of chest that he's got the pictures on top of. I think he picked a nice place. It's pretty neutral," Jones said.

Jones' one critique was that she wished the speaker would "move the plant."

On another occasion, the actress gushed over MSNBC contributor Michelle Goldberg's home background.

"And you know she read them all," Jones said.

The comedian also spotlighted the home of Philip Rucker, a political analyst for MSNBC and the White House Bureau Chief at The Washington Post — and Rucker responded to Jones' comments.

"First of all, I love the blue suit. I love how manicured you look. It's adorable," Jones said in her video.

"I even like the flower arrangement on the table," Jones continued. "I'm not sure why the corn is there. I'm not sure if that's zucchini."

As Rucker clarified in his response to Jones, the produce on his table that appeared in the background of his interview was "squash from the grocery store gourds bin."