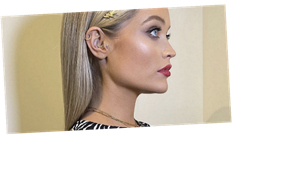 Laura Whitmore has left fans in awe as she showed off her blossoming baby bump in new photos.

The TV star, 35, posed up a storm as she filmed for Celebrity Juice with Keith Lemon, also known as Leigh Francis, and Emily Atack.

Laura looked stunning as she wore a zebra print dress with long sleeves and a slit down one of her legs.

She added some contrast to her look with a red lipstick as she kept the rest of her makeup glowy but simple.

Meanwhile, she wore a cluster of gold necklaces and rings to give a touch of glamour to her look.

Mum-to-be Laura, who looked in shock as Lorraine appeared to accidentally announce her unborn baby’s gender, had her blonde locks in a slick straight down hairstyle and wore a lightening bolt clip on the side.

As Laura posed for stunning photos of herself on her Instagram page, the TV star also posed alongside Keith Lemon, who wore a blue blazer and dark blue hat, and Emily attack who wore a stunning black outfit and raised a glass to the camera.

Laura, who shared how to combat tired eyes recently, then posted the pictures with her 1.3million Instagram followers and revealed she was dressed up to film Celebrity Juice.

The mum-to-be also revealed where her outfit was from as she tagged Bershka for her dress.

She received more than 143,000 likes for the gorgeous snaps while many commented to compliment the star on who gorgeous she looked.

Frankie Bridge wrote: “You look insane! How I wish I looked pregnant!”

While Paloma Faith said: “You are so hot pregnant”. And Little Mix star Perri Edwards added: “LAURA! So beaut” followed by a heart eye emoji.

It comes after Laura revealed she won’t give up working after giving birth to her baby, who she shares with husband Iain Stirling.

Speaking to The Telegraph, she said: “My mum grew up the youngest of 13 children in Catholic Ireland.

“She had a child out of wedlock and worked full-time, which taught me that there’s nothing you can’t do.

“All my friends from school are doctors or teachers. The fact that I even thought it was possible to go off and work at MTV came from my mum because her attitude was: 'If you want to, then why not?'