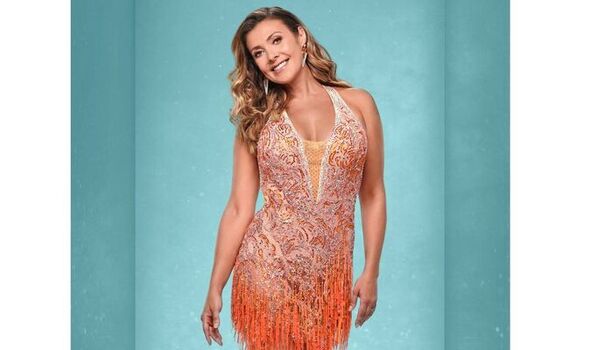 She also said she wants to represent “glamorous grannies” after becoming a grandmother for the second time last month. And Helen Skelton, renowned for her havea-go antics on Countryfile and Blue Peter, said she can’t wait to swap her wellies for the glitzy dancing show.

Kym’s father David, 77, was diagnosed with incurable prostate cancer after a delay in getting a check-up during the pandemic.

She said she had been asked to appear on the show before but “never thought it was the right time”.

But she explained: “My dad got diagnosed with untreatable cancer last March and I’ve just decided to give everything while I can.”

“Without being melancholy, we don’t know how long we’ve got him for, so you’ve got to make the most of the situation.”

“[His] diagnosis does change things. My dad told me, ‘You never know what’s round the corner so grab things with both hands.’ But you don’t think about that until an event happens. It makes you look at things differently.”

The timing is also perfect as her soldier husband Major Scott Ratcliff is currently in the UK and can support her.

She said: “I’m married to a soldier and this year he’s here. Next year he might be deployed.”

“He might not be at every show because there will be a lot of people wanting to come, but he’ll be with me every weekend because that’s when we see each other.”

Kym became a music star after being picked as a member of the group Hear’Say, created by reality ITV show Popstars in 2001. She added: “I am doing this for the grannies!”

Helen, 39, a mother-of-three, signed up for the series after announcing her split from her husband of eight years, rugby player Richie Myler in April.

She said: “Going into make-up and wardrobe as a grown woman is like going into a sweet shop as a kid. I was in there trying on shoes and I was like, ‘oh my God, what is this?’

“This is a show, more than ever, where your family can get really excited. My mum has never ever talked about my work as much as she has over the last couple of weeks.”

I’d love someone to dance to a Bros song, says Strictly hopeful Matt

Singer Matt Goss said he feared becoming a recluse if he stayed in Las Vegas.

He has been performing four times a week in Vegas for the last 11 years but has now relocated to the UK.

He also said he had been treated for PTSD after heartbreaking family bereavements, including losing his mother Carol to cancer in 2014. And on Strictly, he said: “I would like somebody else to dance to a Bros song.”

TV and radio host Kaye Adams has revealed that her partner, sports coach Ian Campbell, is more excited to see former England and Arsenal footballer Tony Adams on Strictly than he is about seeing her.

The Scottish LooseWomen host said: “My partner is much more into sports so he is more excited about Tony Adams.

“My kids are relaxed about it. They’re 20 and nearly 16, probably embarrassed by me – or they will be in three weeks’ time – but they are great, they’re very supportive.”