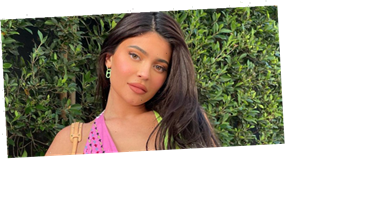 There’s a lot of words you could use to describe Kylie Jenner—shy isn’t one of them. The gorgeous reality star/businesswoman/mama stunned her followers when she posted a photo wearing a red see-through jumpsuit. She completed the look with red heels, a red coat, and a Louis Vuitton bag.

She captioned the post, “the cherry on top.” On top of what, you ask? Tbd. Of course, her followers totally ate up the photo. It’s racked up more than four million likes and more than 15,000 comments.

It looks like Kylie is ~unbothered~ since the recent drama surrounding her former makeup artist, Samuel Rauda’s GoFundMe. After Samuel was injured in a serious accident, a GoFundMe was set up by his loved ones to help cover medical expenses following an expensive major surgery. Kylie was slammed on social media for only donating $5,000 to his fund despite being a billionaire.

She later shut down the “false narrative” about the donation, explaining that she helped his family surpass $10,000, which was their goal. “Anyone that knows me knows that I do things from the heart and I try to be helpful whenever I can be,” she wrote on her Instagram Story after the controversy. “Let’s all stay positive and keep Sam, his family, and anyone you know who is going through a difficult time in our prayers. I hope you have a beautiful day and let’s encourage each other to help.”

If you ask us, that controversy is old news and we’re happy to move on and leave the judgment behind. Looks like Kylie agrees!

You love all the deets on the Kardashians. So do we. Let’s overanalyze them together.