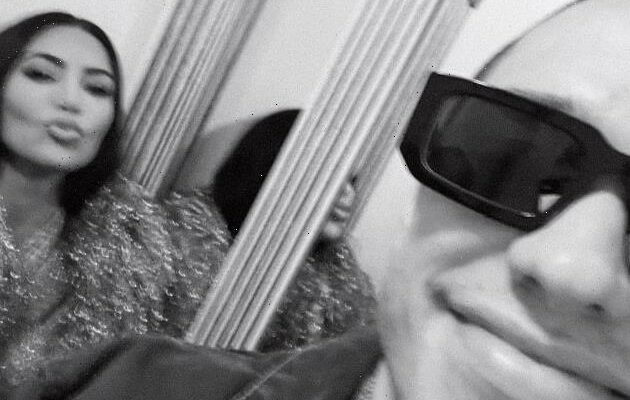 Kanye West may wanna stay off social media for the rest of the day.

Earlier this afternoon, just over a week after being declared officially single by a judge, Kim Kardashian made things official with Pete Davidson.

She announced their relationship to the world.

Yep: Kim shared her very first photos on Instagram of herself and the comedian, looking all cozy, all cuddly and very much like a seriously romantic item.

“Whose car are we gonna take?!” Kardashian simply wrote as a caption to the photos above and below.

As you can see, one of the snapshots features Kim all puckered up in the background, while Pete rocks a confident smirk up close to the camera.

It’s pretty hard not to analyze this cocky expression across Davidson’s face and think anything except the following:

It’s meant as message for Kim’s misguided ex-husband, West, who has ranted and raved online for weeks about the actor, even threatening to bury Davidson alive in a recent music video.

Pete doesn’t look very bothered by Kanye, does he?

In the second alluring image, Davidson is lying back in his girlfriend’s lap, a red hot kiss between the couple seemingly imminent.

“I love this,” Kardashian’s sister, Khloé, remarked in the Comments section of the post.

These pictures, of course, do not represent the first time Kim and Pete have actually been photographed together.

Speculation over their romance revved up in October after they spotted holding hands at Knott’s Scary Farm in October.

Since then, the stars have privately dined together in Staten Island and Los Angeles, while also taking a vacation to the Bahamas together over this past holiday season.

Speaking to Variety for its latest cover story, meanwhile, Kardashian actuallly spoke about Davidson for the first time since she started riding his famously large unit on a frequent basis.

“I have not filmed with [Pete],” the mother of four told the outlet of whether or not her lover would appear on her family’s new Hulu reality show.

“And I’m not opposed to it. It’s just not what he does. But if there was an event happening and he was there, he wouldn’t tell the cameras to get away.”

Not a lot of insight there, we know.

Between this quote and this Instagram upload, however, it does now seem as if Kim and Pete will be even more open about their relationship going forward.

On March 2, just about a year after she filed to divorce West, Kardashian had her wish granted when a judge deemed her to be completely free of her marriage.

She had previously submitted legal documents that asked for this process to be expediated in the wake of West trashing her as a mother, insulting Davidson and acting like a menace in general.

“I very much desire to be divorced,” Kim stated in court documents on February 24, adding at the time:

“I have asked Kanye to keep our divorce private, but he has not done so.”

The former sex tape star added in separate paperwork from this year:

“While I wish our marriage would have succeeded, I have come to the realization that there is no way to repair our marriage.”

She added in that submission to the court:

“Kanye does not agree but at least it appears that he has come to the realization that I want to end our marriage, even if he does not.

And also, it now appears, so Kim can pepper her social media accounts with PDA-themed pictures of her and her new man.