Kim Kardashian’s latest advert has attracted mockery from some of her fans after the reality star appeared to rather obviously be faking it, so to speak.

The 41-year-old aspiring lawyer, who landed back in LA on Monday after her sister Kourtney’s lavish Italian wedding to Travis Barker, shared a video to her Instagram in partnership with Beyond Meat’s range of vegan food, which she called ‘so good’, despite clearly not biting into the brand’s famous burger.

Standing in a blinding white kitchen in the promotional video, the Skims founder is presented with various platters containing meat-free options as she reveals herself to be the company’s new chief taste consultant.

‘I believe so much in the mission of Beyond Meat that I’ve stepped in to help with my greatest asset – my taste,’ she jokes in the advert.

‘This plant-based meat is not only amazingly delicious, but it’s also better for you and better for the planet.’

However, the first dish presented to her is a burger, with the video cutting to her holding a perfectly cut half burger in her hand as she throws her head back in apparent ecstasy and chews – without a bite mark to be seen. 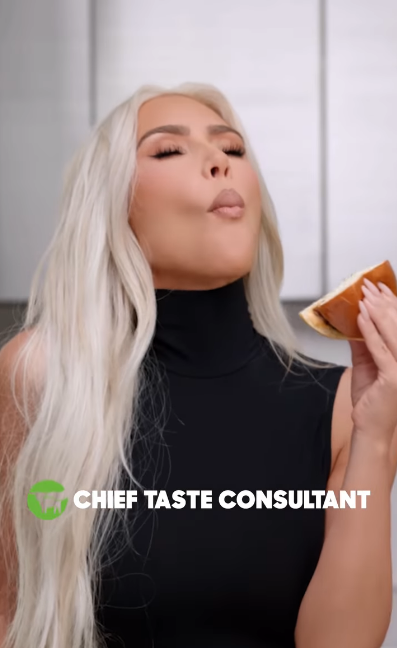 Kim also spears a meatball with a fork, sprinkles toppings onto tacos which she then holds up to her face for a selfie and holds a piece of sausage on a fork too, while she fist bumps the chef and chews – but none bear the appearance of having been eaten, nor is the moment of consumption shown.

‘This is beyoooond meat, so good you don’t even have to eat it,’ quipped one follower in the comments, while another cut right to the chase, writing: ‘The hamburger wasn’t bitten.’

‘I ain’t buying it cause you ain’t really eating it,’ posted one viewer, alongside a laugh-crying emoji.

One follower stated: ‘She ain’t eat nothing ina video or I’m tripping.’

Towards the end of the short video clip however, there is the chance that Kim has in fact tried one of Beyond Meat’s chicken nuggets as she dips one into a sauce that has a bite mark and appears to (maybe) keep eating from it.

Some of Kim’s followers were delighted to see her promoting a vegan lifestyle though, with one commenting: ‘Sooo happy you’re fronting plantbased alternatives.’

‘This is so cool that she is advertising for beyond meat!,’ wrote another while one follower proclaimed: ‘Vegan for the win Kim 👏🥰’