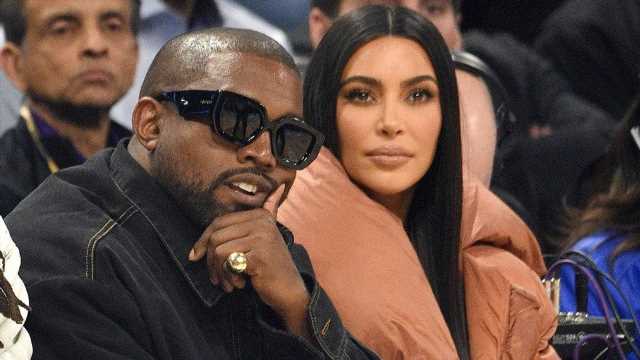 Kanye West knows how to surprise his fans. After a night of unexpected twists at his third listening event for his forthcoming album, Donda, on Thursday, the artist truly threw fans for a loop when he held a faux wedding ceremony.

During the event, this time held at Soldier Field in Kanye’s hometown of Chicago, the artist appeared on the front porch of a recreation of his childhood home which was built in the center of the stadium. After surprising fans with some unannounced guests and unexpected additions to his tracks, the 44-year-old rapper amped up the drama when he lit himself on fire and was engulfed in flames.

While many fans watching the livestreamed event thought that would be the grand finale, Kanye surprised them all when he was extinguished, and was then joined by a woman who appeared to be his estranged wife, Kim Kardashian West.

Kim came out dressed in a stunning wedding gown, including a long, face-obscuring white vail, as traditional wedding music played over the loudspeakers.

kanye lit himself on fire than remarried kim within 2 mins pic.twitter.com/6Fe5GgRxKp

So did he set himself on fire to get rid of his sins and became a new man with @KimKardashian?! pic.twitter.com/xtrOMnbX3P

Ye made #Donda so he can renew his vows @KimKardashianpic.twitter.com/IpZEs7u5ah

Kim and Kanye are the weirdest divorcing couple I've ever seen. #DONDApic.twitter.com/KAkOkbHnE6

The way Kanye smiling it’s gotta be Kim bro look at him!!!!! pic.twitter.com/6evqfX373k

Did Kanye and Kim just get back together? This event is nuts lol

Kanye quickly leaving the stadium without dropping the album after everyone was distracted by Kim K #DONDApic.twitter.com/iGUPB4SpBN

Kim and Kanye are going to make me cry I’ll be brave I’ll be vulnerable pic.twitter.com/MLCsEojkEK

We got Marilyn Manson listening to gospel, Kanye put the GD anthem after a track with Durk, then set himself on fire & lastly, remarried Kim. Bruh WHAT #DONDA#kanyepic.twitter.com/9CumbuNPJH

Kim’s sisters, Khloe Kardashian and Kylie Jenner, also shared the surprising moment, posting pics and clips of the wedding portion of the event to their Instagram Stories.

TMZ reports that the woman was Kanye’s estranged wife, but that the wedding ceremony was simply part of the performance, and that the pair — who share four children and were married for nearly seven years before separating — have not gotten back together.

That being said, Kim has come out to show her support at both of Kanye’s other Donda listening events that were held at the Mercedes-Benz Stadium in Atlanta, Georgia. The pair also recently reunited to grab lunch in Malibu, California, earlier this month, and kept a very low profile while they had several security guards in tow.

A source told ET on Friday that Kim and Kanye “are on great terms.”

“Although they are going through a divorce, the couple still spend time together alone, or with their kids. Kanye lives mostly out of L.A., but when he’s in town they make it a priority to meet up,” the source said. “Kim has had the children lately since Kanye has been working on the album… but co-parenting has been going well for the couple.”