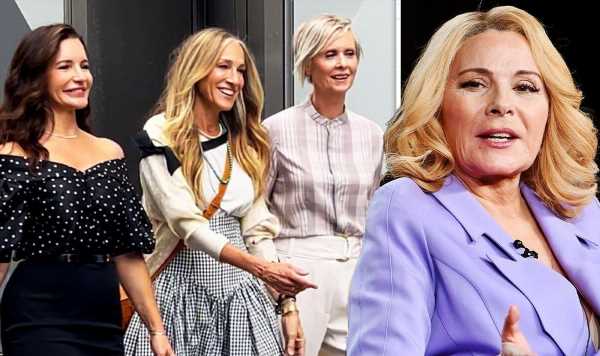 Kim Cattrall: Sarah Jessica Parker could have been nicer

Sex and the City star Kim Cattrall has spoken candidly about not appearing in the popular show’s reboot, And Just Like That… In a candid new interview, the actress, 65, who played the role of PR boss Samantha Jones,  also spoke about not wanting to appear in the show’s third movie as the storyline that never happened reportedly included Miranda Hobbs (Cynthia Nixon’s) 14 year old son, Brady, sending her inappropriate and unsolicited photos.

In the new chat, the star claimed that she wasn’t asked to be part of the reboot.

Kim added that it didn’t surprise her, as she “made her feelings clear after the possible third movie.”

She went on to brand one of her character’s storylines on the third movie “heartbreaking”, even though it never happened.

Branding the plot “heartbreaking”, Cattrall said that she had much better storylines for Samantha.

She said: “Why can’t Samantha, who owns her PR company—maybe she had to sell it because of financial woes?”

“I mean that’s a scenario that was kind of off the top of one of my reps’ heads, and I thought that’s a great idea.

“That’s a conflict. Instead of an underage boy’s…” she trailed off to Variety magazine.

The star previously added that she “loved” her character of Samantha and said that she “didn’t want to compromise” what the show meant to her.

It comes after Sex and the City star Sarah Jessica Parker broke her silence ealrier in the year on whether she thought Cattrall could appear in the spin off show.

Her co-star’s comments come after the pair went through a very public feud that exploded in 2018, leading Kim to shut down any chance she would ever reprise her role as Samantha Jones.

Throughout the spin off series, And Just Like That, Samantha has been texting Carrie, after the pair’s characters ‘fell out’, leading Samantha to move to London.

Carrie told all in the first episode, with more texts between the pair exposed in the final.

In the series finale, Carrie pulls her phone out and texts Samantha about her disappointing kiss with Peter and meeting for a cocktail in Paris.

However, as many fans of the show know, the likelihood of Samantha’s return is very slim.

Sarah has broken her silence on what she thinks about the possibility of her nemesis’ return to the show.

Speaking to Variety, Sarah said: “We didn’t go to Kim for this, you know.

“After we didn’t do the movie and the studio couldn’t meet what she wanted to do, we have to hear her and listen to her and what was important to her.

“It didn’t fit into what was important or needed for us,” she added.