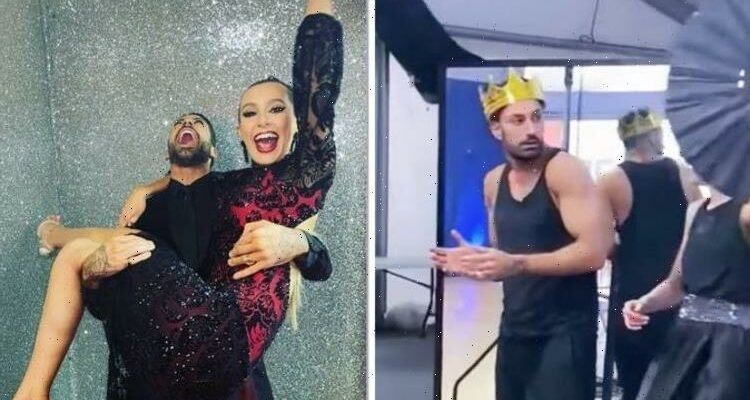 Kevin Clifton, 39, has revealed that Strictly Come Dancing 2021 stars Rose Ayling-Ellis and Giovanni Pernice once had a nasty fall during training. The professional dancer said he received a video from Giovanni over text which showed the incident.

The dancer was talking to his sister, Joanne Clifton, 38, on his podcast The Kevin Clifton Show last Wednesday.

The episode was titled The Strictly Quarter Final Review.

The pair were talking about the lifts performed by Rose and Giovanni.

Kevin then said he would let his sister into a “little secret”, before revealing he’d been texting Giovanni about the show.

The dancer said: “I’ll let you into a little secret as well…

“I was texting Giovanni and he sent over some footage of the camera blocking.

“Where the lift sort of went wrong, he caught her and everything…

“The thing with that lift is it’s not just a leap of faith and he has to catch her, and that has to be timed perfectly, but it’s the momentum once she’s been caught.”

Kevin then explained that they had to have the right momentum to swing into the “rotation movement” and it’s “so easy to just go down.”

Kevin said he received a video from Giovanni of that kind of fall happening.

“They ended up on the floor,” he said.

Kevin and Joanne agreed that neither of them had seen the move being done successfully.

This isn’t the first time that Kevin has brought up the pair on his podcast.

In an episode released in November, Kevin said that he had “seen a change” in Giovanni since his partnership with Rose on the show.

Kevin said, during an emotional dance performance given by Rose and Giovanni in November, that he thought the dancer had “changed”.

“Sometimes you can get so ingrained in your work and so passionate about it being the best it can possibly be, that you almost get consumed by it and it can send you a bit mad.

“Now and again I have got really stressed out to a point where I was mentally exhausted after a season of Strictly.

“After the year that me and Stacey [Dooley] danced together, I myself felt like I was calming down and like I had allowed myself to enjoy the season…and I feel like I am seeing this in Giovanni this year.”

EastEnders star Rose, the show’s first deaf contestant, and her dance partner Giovanni have made it through to the Strictly Come Dancing 2021 Grand Final, which will air this weekend.