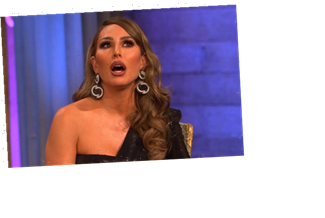 This season of The Real Housewives of Orange County saw Kelly Dodd defend monuments to slavers and white supremacists.

But most of the controversy that she so aggressively courted was on social media.

She made outrageous claims about the COVID-19 pandemic, spreading lies and dangerous misinformation.

At the Reunion special, Andy asked her to respond. Kelly very quickly tried to turn the tables on Andy.

Andy asked Kelly, whose bad behavior saw a boycott of not only viewers but blogs that normally cover RHOC, if she has any regrets.

“I hate wearing a mask, I think everyone’s on that with me,” Kelly began.

“I will wear them because I have to,” she added.

Seemingly unable to resist advertising her total misunderstanding of anything and everything about this pandemic, Kelly blurted out a gross and flawed analogy.

“Does your pants protect you from a fart?” she asked disgustingly, making it clear that she just doesn’t get it.

“Are the masks helping? I don’t know,” Kelly said.

One, we do know — this is not a medical mystery and the efficacy of masks is well established.

Two, are pants specifically designed to prevent spreading viruses? No? Then the analogy is bogus.

With Kelly still not backing down from her desire to ask questions to which we all know the answers, Andy continued his questions.

Andy pointed out to Kelly that he has spent the past 10 months being bombarded by comments from fans horrified by Kelly’s words and deeds.

“Did I take it seriously? Yeah,” Kelly claimed. “But I also was frustrated.”

Andy noted that Kelly continued to travel back and forth between Los Angeles and New York City — when New York was the epicenter of the virus.

She insisted that this travel was justified, on the grounds that she was helping supervise work on her now-husband’s home, and thus it was “business.”

Kelly seems to have forgotten that tens of millions of people either changed how they do their work or lost their jobs entirely during the pandemic.

“Your behavior has really outraged people,” Andy emphasized, trying once again to give her the chance to express true remorse.

Instead, Kelly insisted: “My fan base is building, I haven’t lost any followers.”

“I mean, the amount of messages that I get,” Andy replied, citing examples of viewers saying “that you’re uneducated, you’re putting out misinformation, you’re behaving like a moron.”

Andy was offering Kelly so, so many chances to offer a sincere apology without any backtracking.

Instead, she decided to go on the offensive … and attack Andy.

“I get them too,” Kelly asserted angrily, “saying that you’re anti-American, that you put your political beliefs out there, that they don’t want to watch a political show.”

Braunwyn and Gina’s faces during this moment were priceless beyond belief.

Andy was stunned, asking Kelly if her fan’s think that he is “anti-American” purely because he doesn’t “like Donald Trump.” Kelly responded in the affirmative.

For the record, since the disgraces former President spent four years trying to dismantle our nation, opposing Trump is about the most pro-American that a person can be.

Kelly’s hamfisted attempt at deflection did not work, and Andy went on to ask Kelly if she ever paused to wonder if she shouldn’t post the things that she was posting.

That means her video rants against “haters,” the lies and misinformation about the virus, and a debunked anti-mask video by a “doctor” that got her posting limited on social media for a while.

“I feel like sh-t. I feel horribly and you’re making it worse,” Kelly, who spread dangerous falsehoods during the worst pandemic in 100 years, complained.

“Are you worried you’re gonna be on the wrong side of history?” Andy asked.

“I’m sorry for hurting people’s feelings when that wasn’t my intent,” she offered as another half-baked apology. “What do you want from me?”