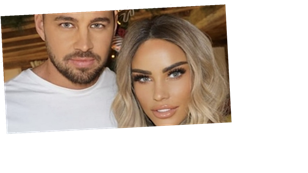 Katie Price's Love Islander boyfriend Carl Woods has sparked speculation he may have asked the former glamour model to be his wife.

The 32 year old, who was recently pictured with a pregnancy test for his other half, took to his Instagram feed to post a sweet snap of himself with the star before gushing over her.

The photo shows the reality star dressed in a plain white T-shirt as the blonde beauty wore a red shirt while offering a smile for the camera. Katie wore a full face of make up for the picture, including blush, bronzer, false lashes and a light lip gloss.

In the caption, Carl wrote: "A girlfriend should be a potential Wife and @katieprice is exceeding all potential #2021".[sic]

Many of his 142,000 fans were quick to comment as they suspecting he either already asked her for her hand in marriage or is gearing up to it.

"You proposed then @carljwoods , if not, why the hell not ?? you 2 [fire emoji] together," [sic] one person wrote alongside a crying with laughter emoji and a red heart emoji.

While a fourth guessed he might ask her to marry him on her birthday on 22 May as they wrote: "I'm guessing you might pop the question on Katie's birthday," followed by a diamond ring emoji.

The speculation comes just days after Katie's divorce from ex Kieran Hayler finally went through three years after their split – leaving the door open for Carl to make his move.

Speaking to The Sun about the end of the proceedings, Katie said: "Finally, we've signed the divorce papers. I'm so happy that I'm free from that marriage.

"The only good thing that came out of it was my children. I can now continue my life with all the badness behind me.

"All I can do is wish him luck. I can't wait to continue my life with Carl," she explained.

Katie, whose eldest son Harvey recently launched an anti-bullying clothing collection, met Kieran, 33, back in November 2012, and after a whirlwind romance, the pair got married just two months later, in January 2013.

After six years together, they announced they were separating in 2018 and filed for divorce. The pair share children Jett, seven, and Bunny, six, together.

Since parting ways, Kieran is now engaged to Michelle Pentecost after proposing to her during a romantic trip to the Maldives in March 2020.