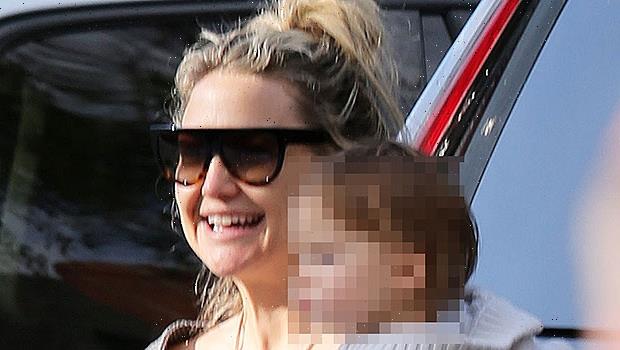 Rani Rose could have a career in Hollywood. Kate Hudson shared a delightful new video of her and her daughter, 3, performing a spirited rendition of Alicia Keys’ “Girl on Fire.” In the clip shared on Instagram on October 7, the actress’ daughter with musician Danny Fujikawa belted out the lyrics to her “favorite song” as she emerged from behind a baby gate.

“7:30 am showing!” Kate, 42, captioned the post. “Rani’s favorite song This Girl is On Fire 🔥 This is how we do it over here….we love putting on a show LETS GO!” Rani opted for soft, melodious start, and eventually put her all into it once she and her mom reached the chorus. She even gave a bow at the end of her inspired performance. Her concert ensemble? A tie-dye dress and festive hairband.

Before sharing the performance in full, Kate uploaded a series of stills that featured her daughter singing while she performed an interpretive dance. She captioned the post, “Interpretive dance is kind of our thing.”

Along with Rani, Kate is also mom to sons Ryder, 17, and Bingham, 10, whom she shares with previous partners. The Almost Famous star began a relationship with her musician fiancé, 35, in 2017. Kate announced their engagement on Instagram on September 13, sharing a photo of the two kissing and showing off her ring. She captioned the post, “Let’s go!”

The marriage would mark Danny’s first time down the aisle, and Kate’s second. She was previously married to Chris Robinson between 2000 and 2007. They share son Ryder together. While Kate and Danny have been romantically linked for four years, they’ve actually known each other for over a decade.

Kate previously revealed in 2017 that she met her fiancé when she was 23 and pregnant with her first child, explaining that they met through his stepsisters (and her besties) Erin and Sara Foster. (Erin and Sara’s mother Rebecca Dyer was with Danny’s father Ron for several years until his death.) “The first time I met Danny I was 23 and enormously pregnant with Ryder,” she wrote on Instagram.

“His step sisters are my best friends @sarafoster @erinfoster and so it goes we have been in the same circle for over a decade!” Kate continued. “A year ago today Danny took me on a hike and what I thought was just a hike with a family friend turned very quickly into an unexpected first date. . . on our 15th year of knowing each other we were able to open our hearts to each other to feel so much pure love and it’s been truly incredible.”