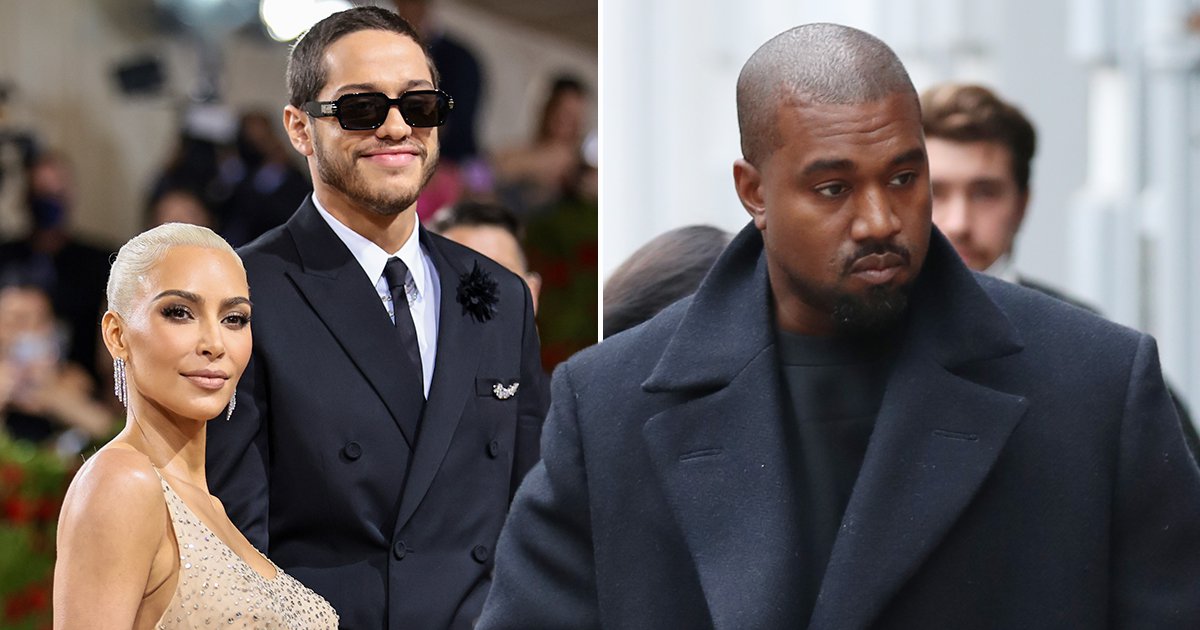 Kanye West has revealed he learned about Kim Kardashian and Pete Davidson having sex by the fireplace how many others did – via a news alert.

The rapper, who now goes by the name Ye, has found a platform to air his frustrations out after being restricted on Instagram and Twitter, by sitting down for an interview with Drink Champs.

It comes after a highly controversial two weeks, which has seen Kanye, 45, wearing a White Lives Matter tee, brand Black Lives Matter a ‘scam’, accused of anti-semitism, having his social media accounts locked and even his bank deciding to end its relationship with his Yeezy brand, meaning the rapper has just a month to move his billions to another account.

However, one of Kanye’s biggest frustrations was hearing in public that his ex-wife Kim, 41, had sex with then-boyfriend Pete, 28, in front of a fireplace to honour her grandmother MJ.

Kim made the revelation in the latest episode of Hulu’s The Kardashians which aired last week, and was seen telling her grandmother how it was bizarrely a tribute to her.

Reacting to the bombshell, Kanye told Drink Champs hosts N.O.R.E. aka Noreaga and DJ EFN: ‘We Jew so I can’t be anti-semite. First of all, I need my stadiums back. The 78 media outlets that called me an “abuser” when I was trying to get… Pete Davidson away from my kids that was tattooing my kids’ names on him, Skete.

He then stated: ‘Kim is a Christian. On TMZ I just saw yesterday it said, “Pete Davidson and Kim had sex by the fireplace to honour they grandmother”. It’s Jewish Zionists that’s about that life, that’s telling this Christian woman that has four Black children to put that out as a message in the media.

‘So when I drive by and I see the Hulu ads and I see the JP [Morgan Chase] ads, I’ma let y’all know right now, the devil is a defeated foe.’

Kanye then revealed how the ongoing fallout from his recent controversial comments and actions have left him without any showbiz friends.

‘You can’t poison me By the way, y’all already f****d with me so much you already Black Mirrored me,’ he said. ‘You already made people think I’m crazy, you already took my family away, you already separated all my friends.

‘I don’t got no celebrity friends because when I was on TV, on Instagram saying I don’t know where my child is and the Kardashians kidnapped my daughter in public and I don’t have the address to my child, none of these n****s gave me the address.’

He then directly called out Meek Mill and Diddy – the latter whose TV station Revolt has aired Kanye’s interview – and said: ‘But as far as Meek Mill, Puff Daddy, all of these n****s. None of you fake hard n****s, f**k you…

‘I’m Michael now, every Michael you can think of. But mostly godfather Michael now.’

She went on to date Saturday Night Live comedian Pete but the two split earlier this summer.

In scenes filmed before the break-up, Kim opened up about their sex life on The Kardashians and said: ‘You know what’s so crazy? Pete and I were staying at the Beverly Hills Hotel last weekend and we were sitting in front of the fireplace just talking for hours.

‘I was like, “My grandma told me that you really live life when you have sex in front of the fireplace”.

‘And so, we had sex in front of the fireplace in honour of you.