Attention @ everyone wondering when Kanye West will go ahead and release his new album Donda: he’s working on it!!! TMZ reports that Kanye has low-key moved into Atlanta’s Mercedes-Benz Stadium—the location of Thursday night’s listening party—and has, as they put it, “made the stadium a home until he finishes his album.”

Sources tell the outlet that Kanye has “literally moved into” the stadium, and apparently he and his team have set themselves up with a studio space, living quarters, and a private chef who is taking care of all their meals. Sounds kinda amazing, tbh. TMZ’s sources say Kanye chose to remain in the stadium because he was super inspired by the crowd at the Donda listening event—though it’s unknown if he’s recording new tracks as a result, or if he’s putting the finishing touches on the album as it stands. 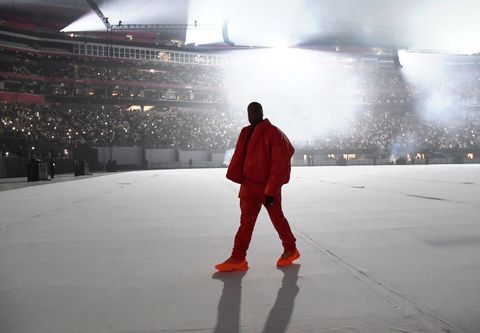 While snippets of Kanye’s new music have been making the rounds online, he is now eyeing August 6th as Donda’s release date, so stay tuned!