But behind the poise, tennis’s most famous mum admits to an inner turmoil as she waits for Andy, the former No 1 champion, to secure his comeback ­following his second hip operation.

It is clear the next two weeks will prove crucial to the Scot’s future chances of competing at international level, and no one is more aware of the pressure he faces than his mother.

She says: “I am like a duck. I am seemingly calm on the surface but I am paddling furiously underneath. It’s all a bluff.

“Andy is a worrier like I am but he is such a fighter and you can never say never with him. He has found a way through the hip resurfacing operation and he will do whatever he can to give himself that chance to get back. He is pumped up and competing again.

“He is a real worker and has gone through the monotonous grind of rehab and paid every attention to detail. He has that mentality that he can do it.”

Murray, 32, revealed at the Australian Open in January that he was about to undergo surgery that could have spelled the end of his career.

But despite the major question mark over his fitness, he returned to compete last month at Queen’s where he partnered Spain’s Feliciano Lopez to take the doubles title.

Today, he is playing his first ­doubles match at Wimbledon with Frenchman Pierre-Hugues Herbert.

But whatever the result, the taciturn Murray can rely on the unqualified support of his mother.

Judy said: “It was so great to see him last week [winning a doubles match at the private Hurlingham Club in west London] because in January we weren’t sure if it was
possibly going to be his last match after his hip surgery but he is so happy to be out there.

“It’s Andrew’s goal to try to get back on the single circuit again. It’s still quite early days and we will have to see what happens. I think he has every good chance of being at Wimbledon next year.” 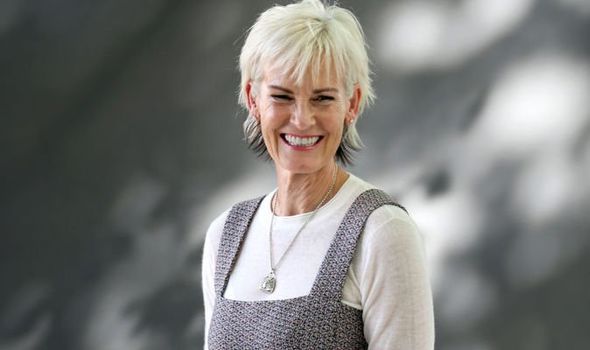 Murray says he is already pondering two options after this year’s ­tournament; putting his focus entirely on singles or continuing to play ­doubles as part of his rehabilitation programme.

And while Judy, 59, always hoped he would be able to resume his career after his operation, she has put no pressure on him to perform.

“I am trying not to go into Wimbledon having expectations, I just go with the flow,” she adds.

“What do I think of people saying he is the greatest player ever? Well he seems to be very popular on both the men’s players and women’s players sides.”

With huge crowds expected to turn out to see Murray in action – he missed last year’s tournament entirely because he was in rehab after his first hip operation – Judy will watch him and her eldest son Jamie, also a doubles player, and then leave straight after every match.

She admits: “I don’t go to Wimbledon every day now. It is so busy and there are so many people that I watch the boys play and then leave.” 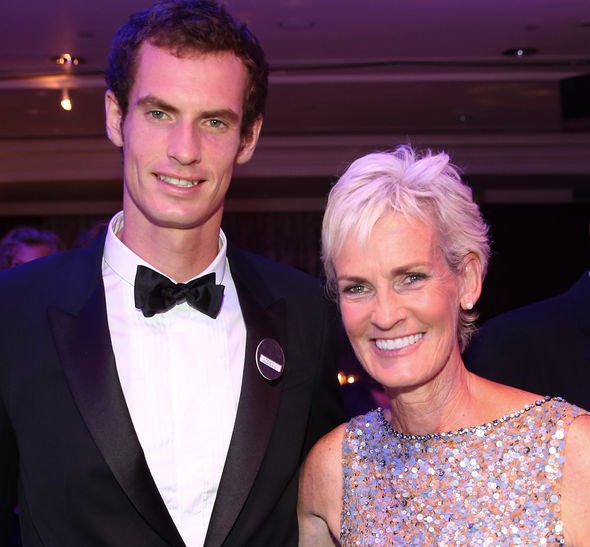 Six years ago, a staggering 17 million people watched Andy Murray beat Novak Djokovic in straight sets to become the first Briton to win the men’s title at Wimbledon in 77 years.

After undergoing back surgery at the end of 2013, Murray had to wait three years to claim his next Wimbledon title against Canada’s Milos Raonic.

And it is thanks to Judy, who inspired both her sons to start playing tennis at a young age.

Growing up, she was an eager ­tennis player but, despite winning 64 tennis titles in Scotland, she chose to further her education and went to study French and business at the University of Edinburgh.

She also trained as a tennis coach and in 1994 became a full-time trainer for Andy and Jamie following her split with their father, William.

In 2011, she went on to become captain of the British Fed Cup team and she created Set4Sport, an initiative to get ­families more active. 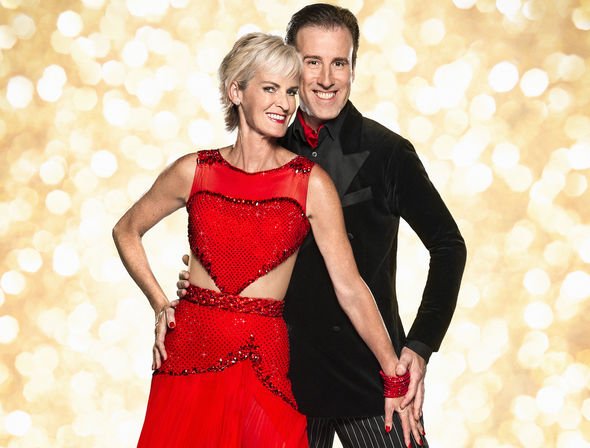 Inspired by her own family, the scheme was all about playing games and having fun in a family environment.

Last year, she launched the Judy Murray Foundation to get people in rural or deprived areas more active.

She says: “My foundation goes into places that you wouldn’t ­normally expect to find tennis. I take it into rural and disadvantaged areas of Scotland.

As soon as the tournament at SW19 finishes, Judy will be flying to America to encourage others to take up the sport.

She reveals: “This year, I’ve already been to Brazil, Australia and Berlin. I am going to Hamburg in a few weeks and Philadelphia next week. 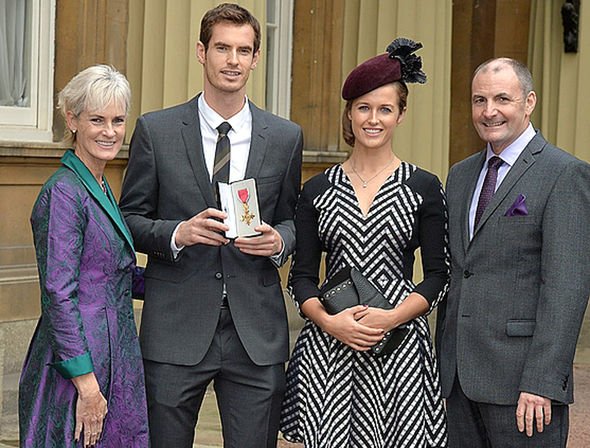 “I do a lot of work overseas coaching people how to teach tennis and how to make it fun. Sport is a male-dominated domain and we need more female coaches.”

As she heads towards her 60th birthday in September, Judy shows no signs of slowing down.

She revels in being a granny to Andy’s two daughters, Sophia, three, and Edie, 22 months.

She says: “I am really enjoying being a grandmother. It’s nice to have girls in the family but Andy and Kim are very private about the family so I don’t really speak about it too much.

“Where do I get my energy from? I have never lost my passion for my sport.”

Boasting a slim frame, she remains in terrific shape. 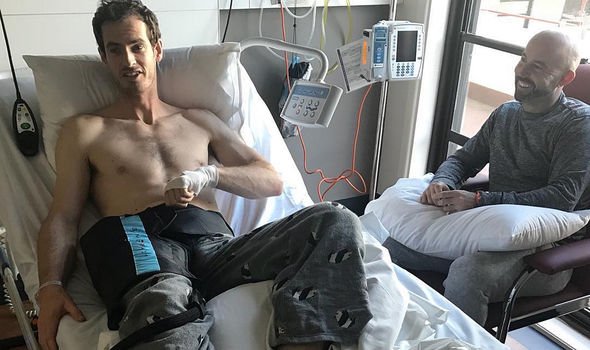 She laughs: “I am probably the size that I am because of the stress of having two sons on the circuit.

“Joking aside, my body shape hasn’t really changed. I still have the same shape I had when I was a student.

“I have a 26in waist but I never weigh myself. I have a fast metabolism but working with young people helps. I am going to be 60 this year and I try to do 15 minutes of something every day – whether that is walking Andy’s dogs – or using a skipping rope.

“It’s great because it weighs nothing, costs next to nothing and it’s easy to go out on the pavement or in the garden to do it. The most important thing is to keep moving. Dance in the kitchen even!”

And she isn’t afraid to admit to some cosmetic help: “I do have a scowl from screwing up my eyes a lot and from being out in the sun.

“Also, playing a sport where you concentrate a lot means you are knitting your eyebrows together.

“As a result, I had a dash of Botox to try to soften my scowl but it didn’t really make much difference so
I left it. I do believe in growing old gracefully.

“Now that I am in my late 50s, I take glucosamine supplements to stop me from getting joint pain. I also take fish oil.”

She says of the show: “The friends that I’ve made have been brilliant. I am still in touch with Jenny Gibney from Mrs Brown’s Boys and [Casualty star] Sunetra Sarker and I am close to Anton particularly.

“I usually play doubles with Anton. If he played a lot then he would get good at it. 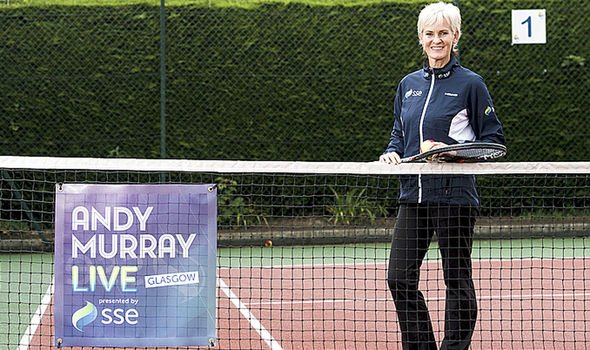 “I loved Strictly but it had a pounding effect on my body. Training was fine but the worst bit was dancing in heels. It really hurt my back and my feet.

“As you get older, learning a brand new skill is difficult and it’s remembering the steps that is the hardest thing. I could practise all morning and then go for lunch, come back and forget the whole lot.

“I’d never do any other reality show now and I can’t see the boys ever doing Strictly, that’s for sure.”

Judy took time out to enjoy the RHS Hampton Court Palace Garden Festival this week but admits to the Murrays not being in the least bit green-fingered. “I’m not a keen gardener but I like looking,” she says.

And Andy and Jamie?

She laughs: “No! They have got other things on their minds.”