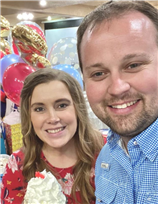 As you’ve no doubt heard by now, the Duggar family is in the midst of the greatest scandal of their scandal-plagued careers.

And critics of the family are doing their best to ensure that Jim Bob won’t be able to rebuild his empire this time, as he has on so many other occasions.

At a bail hearing held on Wednesday, Josh was released to the home of Jim Bob’s friends, as he is not permitted to live in any home where he would be under the same roof as minors.

News of this arrangement came on the heels of Josh’s wife, Anna Duggar, defending her husband’s actions and — insiders claim — even going so far as to insist that Josh was set up by President Biden.

So his family is not shy about the fact that they’re still protecting him, and there’s a good chance that they believe his ridiculous story about a rogue employee uploading the illegal content in order to frame him.

This means that whether he appears on the show or not, Josh will continue to benefit from the production of new episodes of Counting On.

And that’s just one of many reasons that the TLC reality show needs to come to an end.

Amazingly, despite the gravity of the situation in which the network now finds itself, TLC has not canceled Counting On, and there’s no reason to believe that they intend to do so.

At this point, nearly 18,000 people have signed a Change.org petition urging the network not only to cancel the series, but to “Delete All Duggar Shows” — in other words, to remove both Counting On and its predecessor, 19 Kids and Counting, from all platforms, including streaming services.

“The Duggar family should no longer have a platform,” the petition begins.

“Josh Duggar molested his sisters and as of April 29, 2021 he has been arrested (by federal authorities) for child pornography,” it continues.

“This family should no longer be allowed to collect money from streaming services and television series. Enough is enough. Too many people have been harmed.”

It’s nearly impossible to argue against those observations, and yet currently, there’s been no movement on TLC’s end.

Cutting ties with Josh is not enough at this point, as allowing Counting On to continue would mean further enriching people who have sheltered and defended a known sexual predator.

On Twitter, critics are going even further and calling for a boycott of all TLC shows, which would include the wildly popular 90 Day Fiance franchise.

“The fact that @tlc is keeping @duggarfam on the air after Josh Duggar was charged with possessing 200 photos of CP is just HORRIFYING. #boycottTLC,” reads one such tweet.

The scandal couldn’t have come at a worse time for the network, which recently launched a new slate of content that can only be accessed via the subscription-based Discovery Plus app.

TLC placing such a high premium on its content was always a dubious endeavor.

Many have their doubts enough a sufficiently large customer base will be willing to pay for what is essentially basic cable-caliber content.

Now, the network has to contend with questions about whether or not its most basic offerings should be permitted to exist.

And for reasons that defy explanation, TLC execs are refusing to placate the public by at least canceling Counting On.