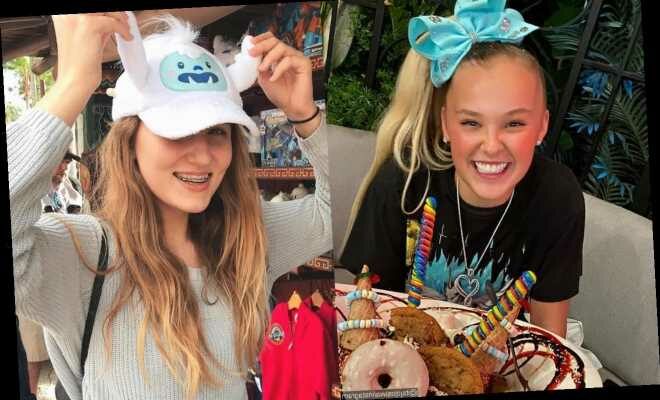 Along with a series of photos capturing her sweet moments with Kylie, the ‘Dance Moms’ alum reveals the exact date they made it official and claims to be the happiest she has ever been.

AceShowbiz –JoJo Siwa has finally introduced the girl she has been dating to the world. Around two weeks after publicly confirming that she was part of the LGBTQ+ community, the YouTube sensation shared photos of her girlfriend in celebration of their one-month anniversary.

Making use of Instagram on Monday, February 8, the 17-year-old uploaded a series of her pictures with Kylie. She also included a clip of them lip-syncing to Justin Bieber‘s “As Long As You Love Me”. In the caption, she wrote, “After being my best friend for over a year, January 8th 2021 I got to start calling this exceptional human my Girlfriend.”

“Since then I’ve been the happiest I have ever been! She seriously is the most loving, supportive, happiest, protective, and just the most beautiful perfect person in the world,” the social media star went on gushing. “And I get to call her mine! Happy one month to my girl! I love you more and more everyday!”

Around one hour earlier, the “Dance Moms” alum turned to TikTok to put out a short clip of her leaning back on Kylie. “I did it!! my human. It’s been 1 month since my best friend asked me to be her girlfriend, and it’s been the best month ever. I love you,” she gushed in the caption.

Also celebrating the monthsary was JoJo’s girlfriend, Kylie. Posting several snaps and videos of the two on her own Instagram page, she raved, “fall in love with your best friend, guys. it’s THE BEST feeling in the entire world. here’s to one month with my favorite human 🙂 i love you sharky.”

In a February episode of “The Tonight Show Starring Jimmy Fallon“, JoJo admitted that her “super encouraging” partner, who she did not identify at that time, was the one who encouraged her to share her sexuality publicly. “[I have] the most amazing, wonderful, perfect, most beautiful girlfriend in the whole world,” she told host Jimmy Fallon.