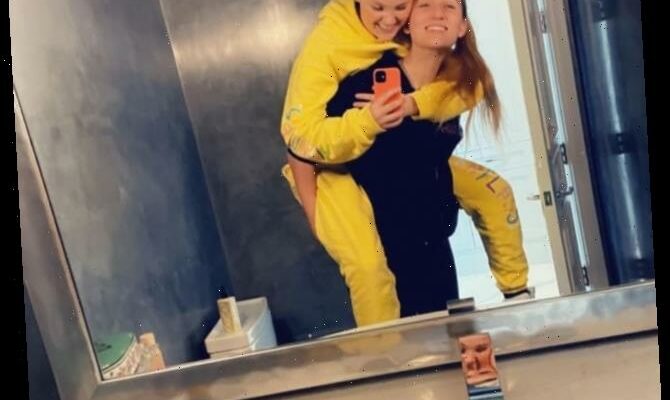 This came just a short time after JoJo came out publicly, an inspirational moment for her countless fans.

Over the weekend, these two young women enjoyed their first-ever Valentine’s Day as a couple.

Their posts are too sweet for words. Take a look:

“It’s my first valentines dayyyy!!” she gushed in the caption.

JoJo raved: “No one in the world makes me as happy as this girl does.”

“I’m so thankful to have fallen in love with the most perfect person ever,” JoJo expressed adorably.

She added that Kylie is someone “who makes me smile 24/7.”

“I love you more than you’ll ever know!” JoJo concluded.

Kylie also had something to say, taking to her Instagram Story to shower JoJo with affection.

“Getting to spend Valentine’s Day with the best human on earth,” the post’s caption reads.

“in love with your best friend, guys,” Kylie advised her followers in previous post.

She adorably wrote: “it’s THE BEST feeling in the entire world.”

“Here’s to one month with my favorite human :)” Kylie added to mark their anniversary. “i love you sharky.”

JoJo spent days dropping “hints” in January that she was coming out before actually doing so.

She showed up on TikTok at Pride House LA, a spot reserved for LGBTQ+ TikTok stars — though some assumed that she might be just a guest.

Finally, JoJo wore a shirt identifying herself as the “best gay cousin ever.”

The shirt was, she wrote, a gift from her cousin. Not to — from.

In that moment, she came out for the first time to the public, and the response was overwhelmingly positive.

Obviously, because our world is crawling with monsters, there were homophobes who lashed out at this 17-year-old girl for … we guess, existing.

These bigoted beasts “threatened” her that their children (for whom we truly feel sorry) will “never” watch her again — to which JoJo very classily replied “okay.”

She was incredibly smart to not get dragged down into some sort of “debate” with a bigot.

No one should ever have to debate their own existence, and doing so implies that bigots somehow have “opinions” worthy of discussion. They do not.

JoJo handily dismissed the homophobes and basked in suddenly getting new fans who are so excited for her very bright future.

It cannot be understated that JoJo is currently at — thus far — the height of her career. When she performs, it is to sold-out arenas.

Her coming out can have such a positive impact, upon young straight fans but also among young LGBTQ+ fans, most of the latter of whom not even knowing who they are just yet.

But also, on a personal level, we are just so happy for JoJo and for Kylie that they can live as themselves — something that would have been impossible just a few decades ago.