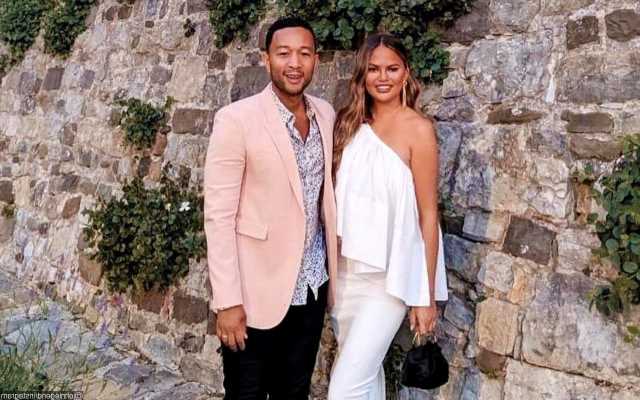 In related news, it is reported that the cookbook author and model is looking to have a sit-down with Oprah Winfrey, following in Meghan Markle and Prince Harry’s footsteps.

AceShowbiz –John Legend is giving fans an update on wife Chrissy Teigen amid cyberbullying scandal. The EGOT winner revealed that the model and TV personality is doing fine following the bullying accusations leveled at her.

John was posed with questions about his wife when he was outside the couple’s Los Angeles mansion on Tuesday afternoon, June 15. In a video obtained by Daily Mail, the “All of Me” hitmaker was seen all smiles as he told reporters that Chrissy “is doing great.”

In related news, it was said that Chrissy was looking to have a sit-down with Oprah Winfrey, following in Meghan Markle and Prince Harry’s footsteps. A source claimed to “Naughty But Nice” podcast, “Chrissy is in talks with Oprah to do a Meghan Markle sit-down type interview and tell her truth. Chrissy is a fighter and believes that she is such an excellent communicator that there isn’t a mess she can’t talk her way out of!”

As of now, the cookbook author was reportedly “being advised to go into hiding and lay low” in the wake of the cyberbullying accusations made by Courtney Stodden and fashion designer Michael Costello. Earlier this year, Courtney, who came out as non-binary, alleged that Chrissy told them to kill themselves when they were 16. Michael, meanwhile, claimed that Chrissy made him suicidal after she blacklisted him in the industry over racist allegations, which Michael denied.

Chrissy recently shared another apology letter in which she vowed to continue being on “path of self-improvement” by reaching out to people she’s publicly insulted in the past in the wake of her “humbling” cyberbullying scandal. “I’m in the process of privately reaching out to the people I insulted…,” she wrote. “I understand that they may not want to speak to me. I don’t think I’d like to speak to me… But if they do, I am here and I will listen to what they have to say, while apologizing through sobs.”

“There is simply no excuse for my past horrible tweets. My targets didn’t deserve them. No one does,” Chrissy went on to say. “Many of them needed empathy, kindness, understanding and support, not my meanness masquerading as a kind of casual, edgy humor. I was a troll, full stop. And I am so sorry.”