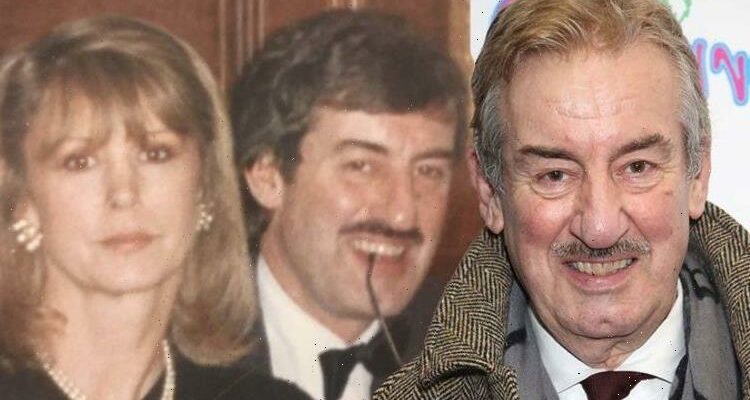 Boycie in Belgrade: John Challis stars in documentary trailer in 2020

John Challis’ widow has been staying in touch with the late actor’s fans by posting on his Twitter account. In the latest update, Carol Challis took to the social media platform to ask fans whether they believed she had been sent a message from her late husband.

Carol uploaded a picture of John’s Arsenal scarf, which featured a “C” inside a circle in the corner.

In view of the account’s 132,000 followers, she wrote alongside it: “I’ve only just noticed this ‘C’ in the corner of John’s beloved ⁦@Arsenal scarf.

John Matthews wrote: “It is indeed. C for Challis.”

Super sleuth said: “It is whatever you want it to be, Carol.

“Sending love to you all.”

“That said Boycie the legend deserved his own scarf and banners. Imho.”

Iancharris agreed: “The style of the C does look like the C you see in copyright.

“It was almost cerrayinly bought from the stadium or an official outlet rather than Delboy standing outside of Highbury tube station.”(sic)

John was laid to rest last week in a natural wicker casket, with his iconic flat cap placed on the top.

The wicker also featured a red flash, as a nod to John’s love for Arsenal.

Following the ceremony, Carol gave an insight into the symbolic references from the actor’s funeral.

She wrote: “We gave my lovely man a good send off yesterday, in the pouring rain, so I’m sharing these pics with you, if you don’t mind.

“The red flash on the wicker is for the lifelong Arsenal fan and the cap was something he wore all the time!”

She later added: “I’d like to thank each and every one of you who has posted such lovely thoughts and words of support, and for all the love shown for John.

“It has been overwhelming and it’s a great comfort to know he will never be forgotten.”