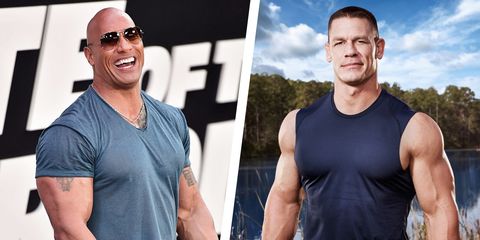 John Cena has been shifting in recent years from the ring to the silver screen. And in a new interview, Cena reveals that he’s been helped along by another WWE superstar-turned-actor: Dwayne “The Rock” Johnson.

“He gave me some pretty cool advice at unbelievable timing,” Cena said in an interview with the Floor Seat published Monday. “He said: ‘Hey man, they’re going to like you, or hate you, for you. Be yourself. At least that way at the end of the day you’ll feel good about your body of work.”

It was a solid bit of wisdom from Johnson, who transitioned from one of the world’s most famous wrestlers into one of its most bankable leading men, proving himself capable of everything from comedy to action to family features.

While Cena is nowhere near the Hollywood star Johnson is yet, he may be on his way. He’s already shown impressive chops as a standout in stacked casts in films like Trainwreck and Blockers, and as the leads in the animated film Ferdinand and Bumblebee—last month’s well-received Transformers spinoff. And with at least four films currently in the works, it seems he’ll be spending even more time on the big screen, as opposed to the ring.

He seems to confirm as much in the interview, telling the outlet that in his early movies, he was merely “trying to create a business model.”

“Then I looked back at myself and realized I just like telling stories,” he said.

A big reason for that realization, he said, was timely wisdom from The Rock—advice that worked for Cena, but that can also apply to anyone’s lives and serve as a pretty decent resolution heading into the new year.

“The Rock has been genuine enough to tell me to be myself,” Cena said. “I think it was great advice.”