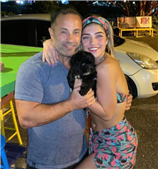 Joe Giudice thinks he has served his time.

And now he has one simple request, even if it might not be so simpe in the eyes of the law.

Giudice, as you likely know, pleaded guilty in 2016 to financial fraud, eventually serving over a year in prison for his crime.

Because the crime was federal, and because Giudice never became a United States citizen, he was deported back to Italy after this time was served.

The father of four has been there everr since, apparentlly getting into the sex toy business and living the best life he can there.

Now, however, Giudice has hired a new attorney and plans to fight for a return to his adopted country.

“I would like to be able to see my children again in our home state, be a part of their lives, be physically present when they need me and watch them grow up,” Giudice told Us Weekly of daughters Gia, 20, Gabriella, 17, Milania, 15, and Audriana, 12.

He shares these kids with ex-wife Teresa Giudice.

“I yearn to hold my grandmother in my arms again before the time comes [in which] she is no longer on this Earth,” continued to ex-Bravo personaliity.

“[I want to] be with my mother [and] my family, to be in the place I have called home since I was a year old.”

Joe has mostly been laying low in Italy since arriving there just over a year ago, not that he’s had much of a choice.

It’s unclear whether this behavior will play a role in any legal decision moving forward, however.

“I’m hopeful and pray that I can finally go home in the near future,” Giudice added to this same tabloid on Friday, November 19.

In 2014, Giudice was sentenced to 41 months in prison after pleading guilty to mail, wire and bankruptcy fraud.

His then-spouse was ordered to serve 15 months at the time and was released early in December 2015.

The former couple announced four years later that they had split after two decades of marriage — and their divorce was finalized in September of 2020.

“Nobody’s perfect. I’ve learned a valuable lesson from all this, and I know my family is the most important thing to me, but it’s better that I’m out here than in [jail].”

Joe’s attorney cautions that it could take 14 months at minimum before a judge will hear Joe’s case.

“We talk a lot about feelings because this process is hard and it’s sad,” the lawyer told Us. “Someone is out there in purgatory kind of waiting [and asking], ‘Can I come see my family?’”