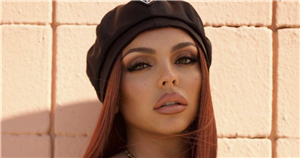 Jesy Nelsonhas teased her second solo single on Instagram, sharing a snippet of the mysterious track with her 8.3 million followers.

Having decided to leave Little Mix back in December 2020, the 30 year old is trying to make a name for herself as solo act and released her debut single, Boyz, last month.

Posting on Instagram on Wednesday 3 November, Jesy also shared a picture of herself in a recording booth, presumably recording vocals for her upcoming album – which is rumoured to arriving next year.

The singer can be seen wearing a furry black bucket hat and plain black top in the snap, while her long hair is worn down.

Jesy’s fans were quick to share their excitement, as one person wrote: "Can’t wait to hear more."

Another said: “AHHHHHHH EXCITING TIMES AHEAD FOR JESSICA NELSON.”

A third penned: “Literally screaming right now, this makes me very excited!!”, before someone else said: “IM SO EXCITED.”

While on the show, Jesy addressed her seemingly rocky of her relationship with her ex-band mates andexplained that they’re no longer on speaking terms.

She told host Graham: “It is sad but honestly there is no bad blood from my side, and I still love them to pieces and genuinely wish them all the best.”

Her comments came after an alleged feud with Leigh-Anne Pinnock who appeared to accuse Jesy of blackfishing after Boyz’s release.

While Leigh-Anne is yet to directly comment on the allegations,the mum of two seemed to address the dramaduring a speech she made at her 30th birthday party.

The stunning star told her friends and family at the bash: "Just don't mind me looking down at my phone as well because I'm really drunk, just bare with me OK, thank you."

She then proceeded to say: "30 years old, I know my character.

"You know my character, anyone that meets me knows much f**king character," she added, while appearing to hold back tears.

For more updates on your favourite celebs, sign up to OK!'s daily newsletter here.