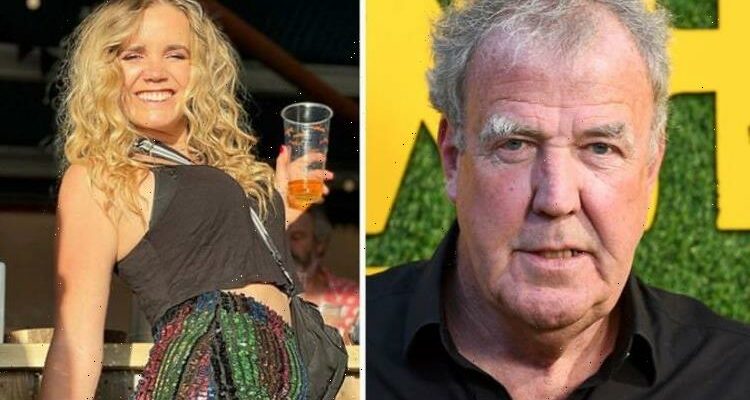 Jeremy Clarkson took to social media today to comment on a picture which was posted by his daughter Emily after she had a slight fashion mishap. The 27-year-old, who is the daughter of The Grand Tour star and his ex-wife Frances Cain, managed to break the zip of her mini-skirt while attending The Big Feastival.

Emily shared pictures from the event, which took place in Kingham near Chipping Norton, on her Instagram account this morning.

The first image showed the blonde with a huge smile on her face as she posed for a photo in the sunlight with a drink in hand.

“It’s all fun and games… until your skirt explodes,” Emily amusingly captioned the post, which she shared with her 200,000 followers.

The second snap showed a close-up of the broken zip on her colourful sequin adorned skirt.

Seeing the funny side of the incident, father-of-three Jeremy took to the comments section of the image to share his thoughts.

“Oh no,” the 61-year-old TV star remarked on seeing the mishap.

“We’ve all been there!!,” another person wrote alongside the picture.

“Least you were wearing good pants!!” a third person chipped in.

While Emily is making the most of the warm weather in the Cotswolds countryside, Jeremy appears to be enjoying a seaside getaway.

Last night, the former Top Gear host posted a picture online of a beautiful sunset, which took place over a dramatic coastline.

“Blue. But with the menacing advance of red,” he captioned the Instagram snap, possibly referencing an earlier football match between his hometown of Doncaster and Rotherham.

“Is this Oxfordshire I don’t recognise it!” one user jokingly asked.

“Hopefully he’s away with [Richard] Hammond and [James] May 🙂 little autumn break from the farm,” another offered.

Earlier this month, Jeremy returned to TV screens with his famous co-stars for the latest instalment of their Grand Tour Series – Lochdown.

The episode was filmed in Scotland during the pandemic due to travel restrictions.

A fourth special, which was also filmed in the UK, will be available to stream later this year.

In the meantime, Jeremy’s farming show is set to return for a second series following the success of its debut this year.

Keeping his fans up-to date, the Amazon Prime star has been sharing a series of behind-the-scenes snaps and videos on the picture-sharing site, in view of his 3.9 million followers.

The programme follows life on Diddly Squat Farm with his girlfriend Lisa Hogan amongst others.