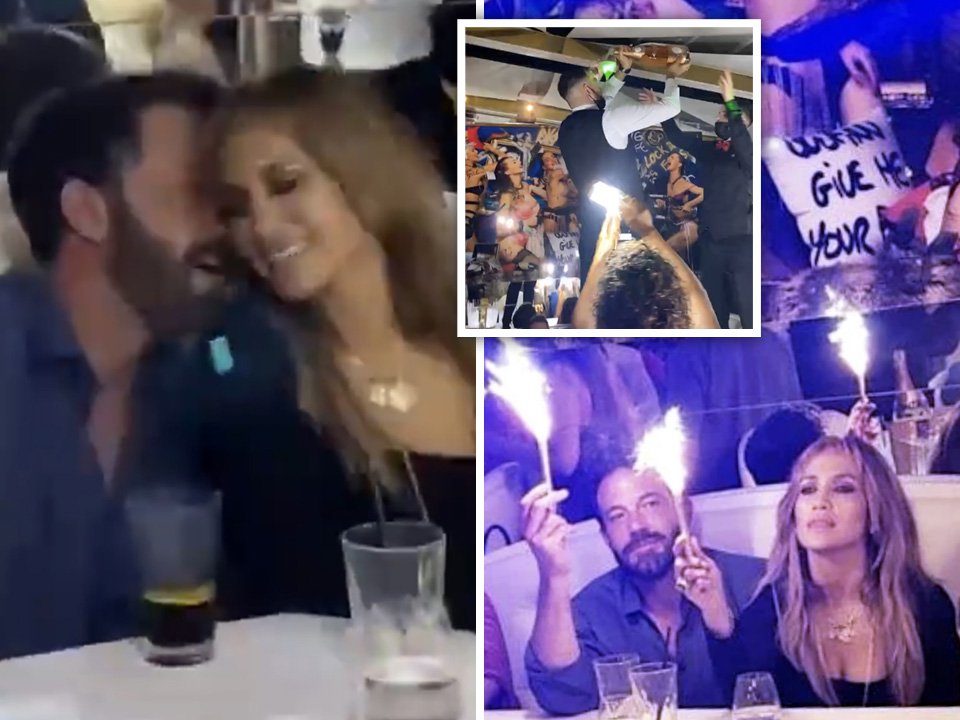 Jennifer Lopez and Ben Affleck piled on the PDA during her birthday celebrations over the weekend.

The actress and singer turned 52 on Saturday, and she celebrated with the actor at L’Opera in St Tropez, France as the couple continue to enjoy their rekindled romance.

J-Lo stunned in a black, long-sleeved Dolce & Gabbana dress for the public outing, while Ben was also dressed to impress in a blue shirt and matching pants.

The couple, who were engaged between 2002 and 2004 but cancelled their planned wedding in 2003 and splitting just months later, got back together this year following Jennifer’s split from Alex Rodriguez, 45.

They cosied up together at a table in the venue with dozens of fans, while behind them was a Philippe Shantgi artwork.

They arrived at around 11pm on Saturday night, and eyewitness Dr. Daniel Campos told E! News that the pair ‘truly looked in love’.

He added: ‘So [the restaurant’s] entire crew came out dancing and singing holding a sign that said “Happy Birthday J-Lo” and we all sang along around J-Lo and Ben.

‘I think they felt pretty comfortable there. My table was next to theirs and I didn’t feel they were trying to be isolated.

‘Of course, there were bodyguards but we all got up and danced and there was not any pushing around or space restrictions. It was just like any other jet-setter couple celebrating something big.’

During the night, DJ Hugo M played the birthday girl’s 2002 classic Jenny From The Block – you may remember a certain Mr. Affleck featuring in the video – as J-Lo herself sang along.

There were dancers on a table with huge bottles of Champagne, and Jennifer’s 1999 hit Let’s Get Loud upped the ante with sparklers, glow sticks and a smoke machine.

The couple looked to be loving every minute, as they occasionally locked lips and filmed the scenes on their phones.

This weekend marked the first time they have confirmed their romance on their own social media accounts, as Jen shared a kiss to her Instagram page and captioned the snaps: ‘5 2 … what it do …’

The pair have, however, been photographed kissing multiple times in recent weeks, even heading on holiday to The Hamptons.

They were also pictured cuddling in a photo shared to pal Leah Remini’s account the day before sharing their kissing picture, posing in a photo booth alongside Leah.