‘The Morning Show’ star looked completely shocked when the interviewer asked if she was a ‘hugger’ over a video call.

Sometimes, it’s hard to tell exactly what someone is saying on a video call! We’ve all been there! Jennifer Anniston, 52, was taken aback, when she misheard presenter Josie Gibson during an interview for the U.K.’s This Morning show on Monday September 13. Her The Morning Show co-star Reese Witherspoon, 45, obviously found the whole misunderstanding hilarious, as she laughed out loud during the exchange.

Josie was asking a pretty simple and easygoing question to Jennifer, before the miscommunication happened. She was speaking about social distancing during the COVID-19 pandemic and how difficult it can be to miss out on embracing others. “Are you a hugger, Jen?” she said, before the Friends star looked shaken up by the question. “A hooker?” she responded, as Reese doubled over in her seat. Josie quickly tried to make her question clear and mimed hugging to get the message across. “No, I did not say that! A hugger,” she said. Jennifer let her know that it was completely okay! “Sorry, it could’ve been a translation misunderstanding. Yes, I am a hugger,” she said.

Josie then laughed and circled back to why she’d asked if she was a hugger in the first place: how difficult the COVID-19 pandemic has been for huggers! “So this has been really hard for people like us,” she said. Reese chimed in with one last joking comment about the misunderstanding. “But she’s not a hooker, no,” the Legally Blonde star said. While both Jennifer and Josie looked somewhat mortified by the misunderstanding, they both seemed to realize how funny the mistake was pretty quickly, while Reese reveled in the misheard question. 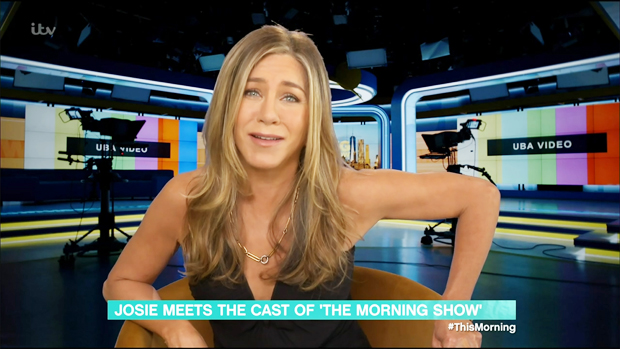 The hilarious misunderstanding wasn’t Jennifer’s only memorable recent interview. The Morning Show stars had an awkward chat on The One Show, when host Jermaine Jenas said that Jennifer had “sold it to [him] that she’s not a morning person.” The We’re The Millers actress seemed stunned by it, but her co-star helped keep the conversation going. On a different note, Jennifer broke down in a tears in a preview for an upcoming interview on Ellen, as the star was Ellen Degeneres’ first guest all the way back in 2003.