Friends‘ Ross and Rachel had one of the most iconic TV relationships, with their on-off romance spanning all 10 seasons.

But things could have been very different, with cast members Jennifer Aniston and David Schwimmer admitting they could have got together in real life.

During the highly-anticipated reunion, when James Corden asked if anything had ever happened between any of them, it suddenly got a bit awkward with Jennifer saying: “Well… erm, David? The first season.” 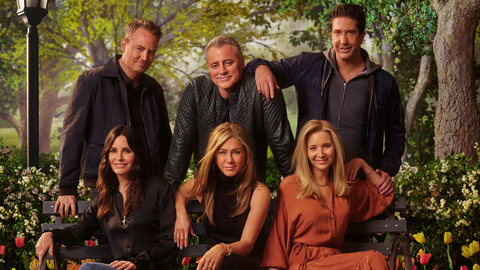 Related: Friends star Jennifer Aniston stole one of Monica’s dresses from the set

“Well, the first season I had a major crush on Jen,” he responded, with Jennifer adding that it was reciprocated.

“At some points we were both crushing hard on each other but it was like two ships passing because one of us was always in a relationship,” he said. “So we never crossed that boundary, we both respected that.”

Joey actor Matt LeBlanc interjected “bullshit,” before admitting that he was just joking.

“I remember saying one time to David, ‘It’s going to be so such a bummer if the first time that you and I kiss is going to be on national television’,” Jennifer added.

“Sure enough, first time we kissed was in that coffee shop. So we just channelled all that adoration and love for each other into Ross and Rachel.”

Courteney Cox, who played Monica Geller on the show, added that she was glad the pair didn’t hook up as “it wouldn’t have been the same”.

Related: Friends star Jennifer Aniston says ex Brad Pitt was one of her favorite guest stars on the show

“When we had breaks from rehearsal there would be moments where we would cuddle on the couch,” David continued, with Jennifer sharing that they would spoon and fall asleep there.

“I’m thinking, ‘How did everyone not know we we crushing on each other?’,” he said, before the rest of the cast insisted: “We knew!”

The Friends reunion is available to watch now on HBO Max in the US and on Sky in the UK. It will be broadcast at 8pm tonight (May 27) on Sky One, while it is also available on NOW.