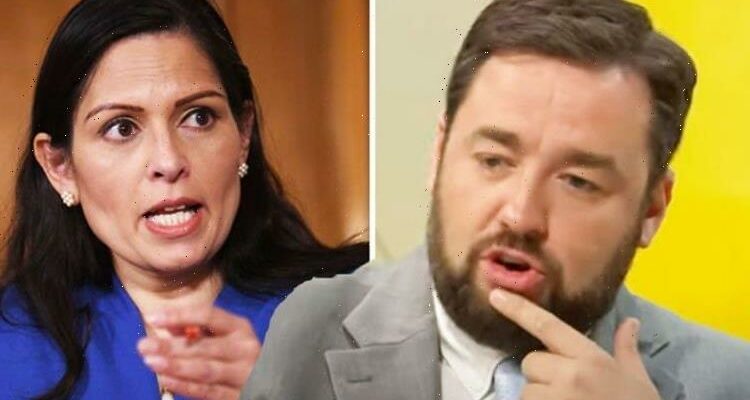 Jason Manford, 40, took to Twitter and reacted to Priti Patel’s response to the racism England players received after Sunday night’s game. It comes after professional player Tyrone Mings had criticised the Home Secretary for “stoking the fire” with her comments in the past.

Following the game, which was England’s first major tournament final since the World Cup in 1966, team members including Marcus Rashford, Bukayo Saka and Jadon Sancho have been met with a wave of racist remarks online.

Ms Patel said she was “disgusted” by the online abuse directed at the trio.

The Home Secretary tweeted: “I am disgusted that England players who have given so much for our country this summer have been subject to vile racist abuse on social media.”

However, Mings said she had “stoked the fire” by refusing to criticise fans who booed the England team for taking the knee at the start of the tournament.

Taking to the micro-blogging site, Jason retweeted the cabinet minister’s tweet, in view of his 379,000 followers.

England players Rashford, Sancho and Saka were all targeted online with social media abuse after the trio missed spot kicks in Sunday’s penalty shootout against Italy, which England lost 3-2.

A mural in honour of Rashford for his campaign work with respect to food poverty was defaced within hours of his penalty kick.

Aston Villa centre half Mings drew attention to the apparent contrast between Ms Patel’s comments yesterday – when she said she was “disgusted” by the abuse – with her previous criticism of the players for taking the knee.

Mings tweeted: “You don’t get to stoke the fire at the beginning of the tournament by labelling our anti-racism message as ‘Gesture Politics’ & then pretend to be disgusted when the very thing we’re campaigning against, happens.”

Speaking to GB News about the England players’ protest in June, the Home Secretary said she did not support “people participating in that type of gesture politics”.

Paul Sinha speaks out on decision to go public with Parkinson’s[LATEST]
Bradley Walsh: The Chase host to undergo surgery ‘Really struggle'[HEALTH]
Mark Labbett turned down for Strictly debut ‘Got no chance!'[STRICTLY]

Asked if she would criticise fans who booed England players taking the knee she said: “That’s a choice for them, quite frankly”.

Elsewhere, Jason admitted he was “p***ed off” that theatres had been forced to close but Wembley stadium held around 60,000 fans to watch the Euro 2020 final.

He fumed: “Watching a packed Wembley last night, I did feel p***ed off that theatres have still been closed all this time! I mean that’s b*****ks innit? I get they had vaccs/neg tests to get in but why didn’t they do that for theatre? “Football fans are the least trustworthy people to behave!”

Restrictions are currently in place for indoor venues but are due to be completely lifted by July 19.

England’s move to step four of the government’s lockdown-easing roadmap will see social distancing rules and limits on social contact removed across the country.

Health Secretary Sajid Javid said this was a “major milestone”, the move to step four on 19 July will see social distancing rules and limits on social contact removed across the country.

And all remaining businesses that have been closed during the pandemic, such as nightclubs, will be allowed to reopen.

“We’ve all be yearning to get there and we all want this to be a one-way journey,” Mr Javid told the House of Commons.