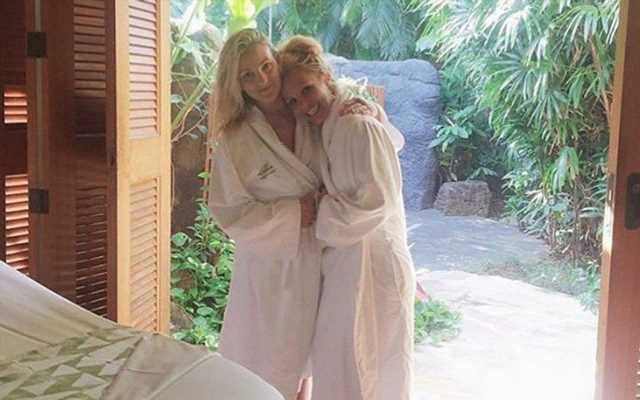 The former ‘Zoey 101’ star talks about her self-esteem issues, explaining that, while she’s proud of her superstar sister Britney Spears, she struggled to escape Britney’s shadow.

AceShowbiz –Jamie Lynn Spears has said being Britney Spears‘ sister gave her self-esteem issues. The former “Zoey 101” star is participating in the Fox reality show “Special Forces: World’s Toughest Test“, and during the first episode on Wednesday, January 4, 2023, she broke down in tears as she spoke about struggling to find her “own identity” in the shadow of her pop idol sibling.

“Growing up, my sister became famous, worldwide famous, when I was very young. I’m so proud of her, love her to death, but I don’t know. Sometimes I feel like I don’t really have anything for myself,” she said. While insisting she is “proud” of her 41-year-old sister, the 31-year-old actress confessed, “I struggle with self-esteem all the time.”

The siblings have been at loggerheads with Britney blasting Jamie Lynn for not supporting her while she was under her conservatorship. However, last month, Britney appeared to suggest she’d made up with her sister when she posted a loving tribute to her on Instagram.

She wrote on her birthday, December 3, 2022, “It’s my b-day but you’re my heart so I’m thinking about you … congratulations on being so brave, inspiring, and showing guts and glory in your show !!! You ain’t alone … if anybody knows what that feels like … I get it. My baby sister !!! I love you !!!”

The “Toxic” hitmaker’s husband Sam Asghari just spoke out after fans claimed Britney was not in charge of her own social media accounts following the post on her birthday. Sam told TMZ, “I don’t even control what we have for dinner. In the past, there has been a lot of stuff going on so I understand where [some fans are] coming from. They’re just being protective. If anything they’re being good fans.”

Sam – who tied the knot with Britney in June – previously admitted he was not a fan of the racy content his wife posts on Instagram, but insisted he would never try to censor her posts as she was previously under a conservatorship for 13 years.

He wrote on his Instagram Story, “The only person in the world that gets bullied for posting things like this. I personally preferred she never posted these but who am I to control someone that’s been under a microscope and been controlled for most of her life.”

Meanwhile, it was recently revealed that Britney’s former husband Kevin Federline is planning to write a tell-all book about the star. The 44-year-old dancer was married to Britney from 2004 until 2007 and was granted custody of their sons Sean, 17 and Jayden, 16, upon their divorce.

However, he is now “writing a book on his experience of fatherhood” as a nondisclosure agreement is set to come to an end along with child support payments. A source said, “He turned down multimillion-dollar book deals in recent years.”

“Kevin’s divorce settlement and child support payments include a nondisclosure agreement. But that expires when the boys turn 18. Once that happens, Kevin is free to tell all – and he knows everything.”

The “…Baby One More Time” hitmaker was placed under a conservatorship governed by her family in 2007 following a personal breakdown and, although she regained control of her fortune upon its termination in 2021, she has since become estranged from her parents and children.

Kevin has reportedly teamed up with Britney’s father Jamie Spears – who headed up the conservatorship arrangement and allegedly put his daughter under various restrictions and dictated her professional obligations – for the book now that they “are now speaking to each other once again” following a fallout.