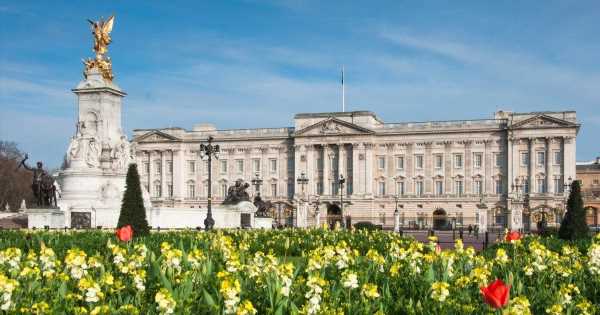 The world is ever curious about royal lifestyles.

With films like Mrs Brown, The Queen and The Young Victoria being massive hits, it’s clear the Windsors have even the most ardent republicans showing interest.

Indeed, 73 million households across the globe tuned in to Netflix’s The Crown.

There are 23 royal residences, both official and privately owned, currently in use by senior members of the Queen’s family.

They range from Clarence House in London, where Prince Charles and Camilla live, to neighbouring St James’s Palace, where the likes of Princess Beatrice and the Princess Royal have apartments, through to Bagshot Park, near Ascot, the Earl and Countess of Wessex’s country pile, and Thatched House Lodge in Richmond Park, the home of the Queen’s cousin Princess Alexandra.

A further 120 castles, lodges and grand homes across the UK have also served as royal residences over the years.

Balmoral and Sandringham in Norfolk are personally owned by the family and passed down through the generations, while other homes, including Buckingham Palace and Windsor Castle, are owned by the Crown Estate.

As such, they belong to each monarch during their reign but aren’t theirs to sell (think of it like Downing Street being home to Prime Ministers during their term in office).

Many other members of the royal family lease their homes from the Crown Estate.

Secrets Of The Royal Residences

This special collector's edition of OK! looks inside the hidden tunnels at Buckingham Palace, the spectacular gardens at Highgrove, the Cambridges' town and country retreats and the cosy Welsh bolthole loved by Charles and Camilla.

It explores exactly what it takes to run a royal household, with experts and former staff revealing how they prepare to host state dinners and celebrations.

Plus, discover the history and hauntings of the residences and how you can holiday on the royal estate.

You can purchase the special edition magazinehere for £4.99.

And the Crown Estate doesn’t just own royal residences – it owns almost the whole of London’s Regent Street and half of the buildings in the vicinity of St James’s Palace.

Outside of the capital, it’s the owner of Ascot racecourse and 17 shopping centres, including Rushden Lakes in Northamptonshire and Westgate in Oxford.

With a property portfolio worth around £14 billion, the estate even owns the seabed out to 12 nautical miles from the coast of Britain, which includes most of the country’s offshore wind farms.

In addition, the Queen has the Duchy of Lancaster, a property portfolio that was set up in 1399 to provide a personal income for the monarch.

Do you love celebrities, fashion, home interiors and beauty? Then do not waste another minute of your time and sign up to our daily newsletter, where you will receive all that – and more – straight to your inbox at 5pm every day.

From exclusive at home tours, cleaning hacks, the latest in beauty trends – and of course, all the latest celebrity gossip, look no further.

Pop your email address in the box at the top of this article, and et voila! Enjoy

The duchy includes commercial, residential and agricultural property, owning much of The Strand, including The Savoy Hotel, and farm land across the north of England.

Prince Charles has a similar set-up with the Duchy of Cornwall, an income vehicle for every Prince of Wales.

As well as owning a third of Dartmoor National Park and land in 23 other counties, the duchy owns some rather surprising business properties including Dartmoor Prison, the Oval cricket ground and even a B&Q warehouse in Milton Keynes.

This all adds up to a seriously wealthy property empire.

Buckingham Palace, the Queen’s administrative HQ, is worth an astonishing £2.2 billion, Windsor Castle in Berkshire is valued at £180 million, while Sandringham House in Norfolk is said to be worth £48.5 million.

There were more than one and a half million visitors to Windsor Castle in 2019, while Buckingham Palace opened its doors to 578,000 of us.

The third most popular is the Palace of Holyroodhouse in Edinburgh, where 496,000 of us bought tickets that year.

All in all, the income generated from ticket sales and merchandise purchases was £50 million in pre-pandemic 2019.

Where to visit and when

Windsor Castle, the Palace of Holyroodhouse and The Queen’s Galleries are open year-round.

The State Rooms at Buckingham Palace will open from 22 July-2 October this year.

Keep up-to-date with all the very latest celebrity, health, beauty, parenting and entertainment news with the OK! app

Only select news that interests you by picking the topics you want to display on the app's homepage.

Go behind the scenes on your favourite OK! shoots, take a look inside your favourite star's homes and be introduced to their new babies before anyone else!

This summer, special Platinum Jubilee displays will be included in visits to Buckingham Palace, Windsor Castle and the Palace of Holyroodhouse.

The Royal Mews will reopen from 19 May-2 October.

For opening times and tickets, please visit rct.uk. Official commemorative items, including the official Platinum Jubilee range, can be purchased at royalcollectionshop.co.uk or from Royal Collection Shops in London, Windsor and Edinburgh.

Content taken from Secrets Of The Royal Residences, a special Royal edition of OK! magazine on sale here for £4.99

For all the latest royal news, sign up to OK!'s brand new Royal newsletter.