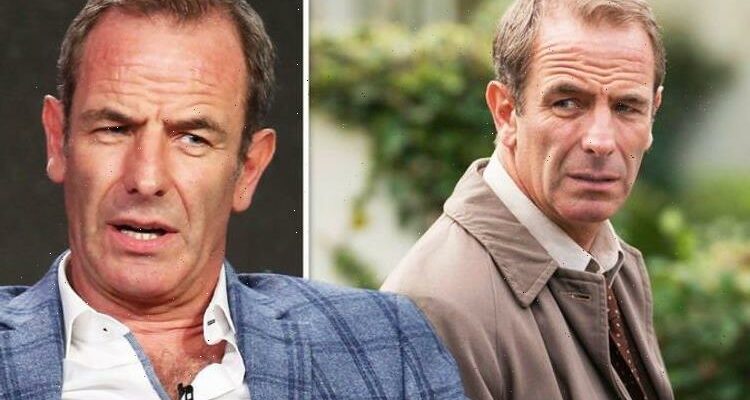 Grantchester actor Robson Green, 56, ruptured a disc in his lower back four years ago, “blacking out” on his way to Royal Ascot. The ITV star told how the pain was so severe he lost consciousness as his partner Zoila and paramedics rushed to check whether he was paralysed.

The actor, who plays Geordie Keating in the ITV drama, told how he suspects his back injury stemmed from a fishing trip, which saw him catch a 360kg fish for his Extreme Fishing TV series.

Speaking last year, Robson recalled: “I’d been in Costa Rica fishing for enormous marlin and remember my lower back tweaking as I landed one of about 800lbs.

“I sat down and had weird pins and needles in my legs.

“I flew home and knew something wasn’t right as I got off the plane,” he added.

But instead of immediately seeking medical attention, the star attempted to “ignore” his injury so he could attend a family outing.

Robson continued: “But I was taking my Uncle Maddison to Royal Ascot the next day so I tried to ignore it.

“We got dressed up in top hat and tails and were about to leave when I bent over to pick up my keys.”

The actor said it was then that the pain of the fishing injury overcame him and he passed out.

Robson explained: “It was like someone hit me in the back with a pick axe and I blacked out with pain.”

The star told how when he came to his senses he realised he had vomited and was being asked by medical professionals if he had lost control of his bladder.

“When I came round there were two paramedics standing over me,” he said.

“I’d got vomit down my side, my legs were in spasm and Zoila, my partner, was there and very upset.

“Then this lovely Australian paramedic named Julia leant down and said quietly, ‘Now, Robson, have you wet yourself? Did you s*** your pants?’

“And I’m thinking, ‘What?! I don’t know!’ It turned out they were checking if the ruptured disc had damaged the spinal chord – because that can paralyse you,” he explained.

Luckily, the star’s ruptured disc hadn’t affected his spinal cord but he remained in agony until undergoing surgery on his back.

Robson described the pain as “all-consuming”: “Your dignity goes out the window. You can’t even wipe your own bum,” he told The Mirror.

After undergoing surgery, the actor told how he “kissed and hugged” his surgeon for “saving his career”.

He also explained that before suffering the accident, he took his health for granted until sustaining the “awful” injury.

Robson added that he now swears by a five-minute freezing-cold shower everyday to help him “function” better.