They’re reuniting after 25 years for one more wedding.

And on Tuesday Hugh Grant, Andie McDowell and the rest of the Four Weddings and a Funeral cast united for another trailer to tease the hugely anticipated sequel, which will air in aid of Red Nose Day on March 15.

The clip, released alongside new behind the scenes photos, sees the all-star cast speaking to camera as they cordially invite fans to join them for the short film follow-up titled One Red Nose Day. 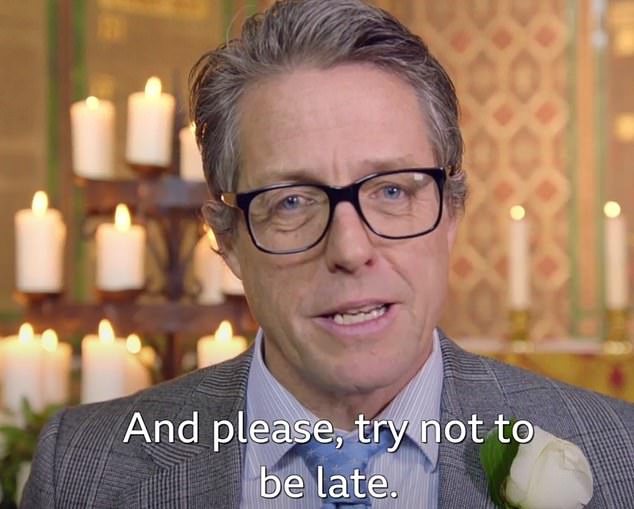 You are cordially invited: Hugh Grant, Andie McDowell and the rest of the Four Weddings and a Funeral cast united for another trailer to tease the sequel, which will air in aid of Red Nose Day

Hugh, who returns as hapless romantic Charles, and Andie, back as love interest Carrie, lead the introductions as they say their character names while dressed in their wedding finery.

Hugh ends the trailer by ‘requesting the pleasure of your company at the wedding of the year’, warning ‘please try not to be late.’ Coming soon: The clip, released alongside new behind the scenes photos, sees the all-star cast speaking to camera as they cordially invite fans to join them for the short film follow-up 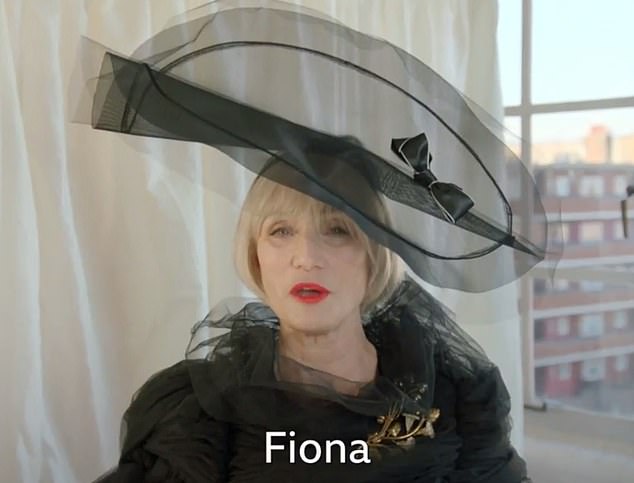 All-star cast: Kristin Scott Thomas (Fiona) makes an appearance in the new trailer ahead of the film’s airing on March 15

New behind the scenes photos have also been unveiled showing the stellar cast filming in a church last December.

Not pictured in the new images is Lily James, who is playing Hugh’s daughter in the sequel, and the bride of the centrepiece wedding.

It hasn’t been confirmed though if Carrie remained with Charles, and is therefore the mother of the bride. 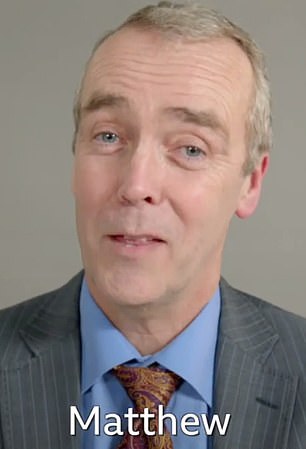 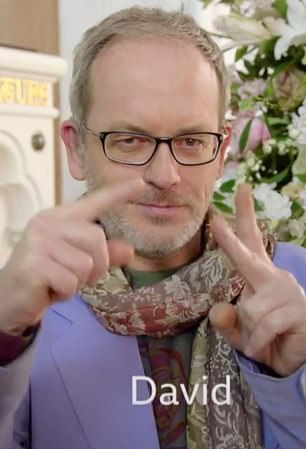 Wedding guests: John Hannah is back as Matthew while Charles’ brother David, played by David Bower, signs his name in the short clip 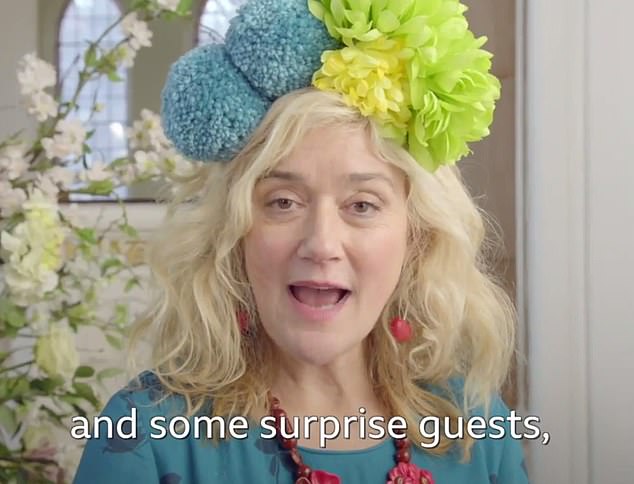 One Red Nose Day and a Wedding reunites the cast of the classic romcom, along with writer Richard Curtis, who penned the original film and is the co-founder of Red Nose Day, and director Mike Newell.

As filming began shooting, the cast sent fans wild while littering social media with a slew of behind-the-scenes snaps.

Emma Freud, the partner of the film’s writer Richard, live tweeted the first day of shooting to the delight of fans, as she shared snaps of the original 1994 cast and some surprise cameos. 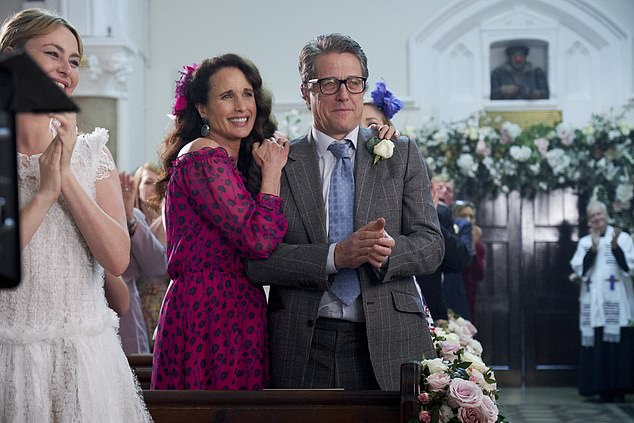 Parents of the bride? Hugh and Andie are seen embracing in one of the newly released photos from set, with the pair thought to be playing the mum and dad of bride Lily James in the sequel

Kristin Scott Thomas’ real life son is also making an appearance in the new short set 25 years on, playing unlucky in love Fiona’s son, with a photo showing the handsome offspring chatting to cast on set dressed in a smart suit to play an usher.

GMB presenter Susanna Reid will also be making an appearance along with Spooks star Raza Jaffrey.

There will be a notable absence from the cast though as sadly Charlotte Coleman who played Charles’ flatmate Scarlett died in 2001. 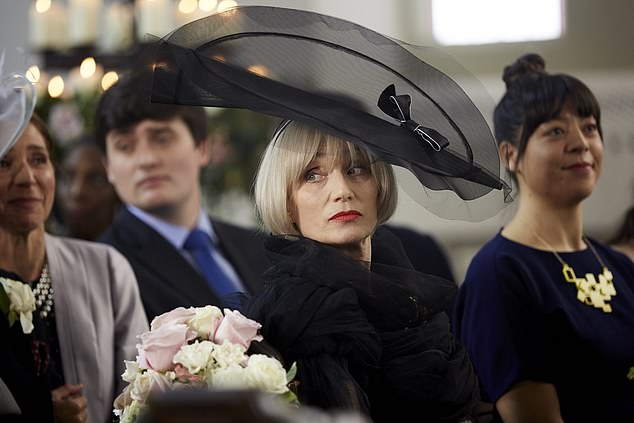 Best dressed: Kristin looked fabulous in a huge hat to rival Carrie’s at the the new wedding, while pulling a sour expression sat in the pew 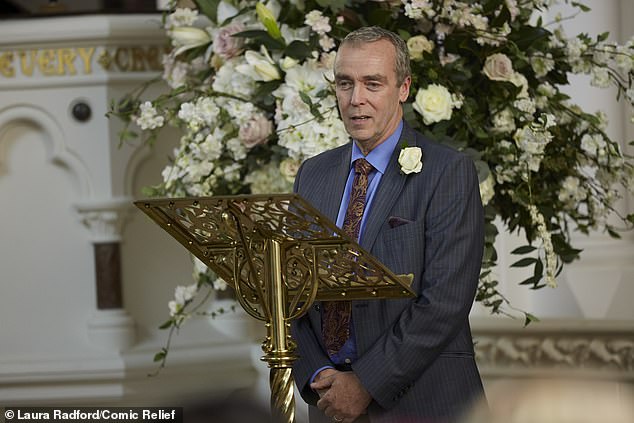 Memorable moment: John Hannah is pictured making a speech at the wedding, with his character Matthew famous for the emotional tribute at the original film’s funeral 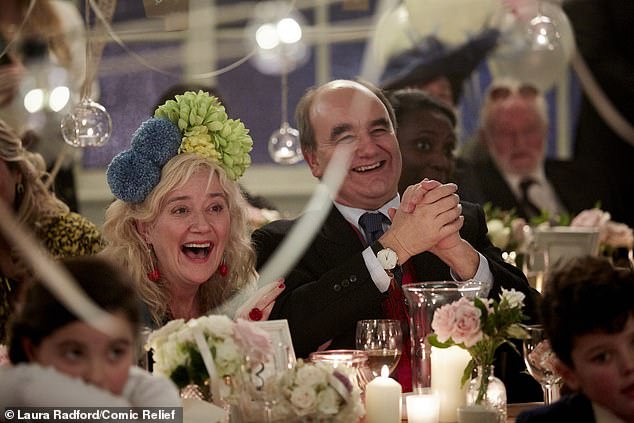 Still going strong! Sophie Thompson and David Haig looked in great spirits as they listened to the speeches in one snap 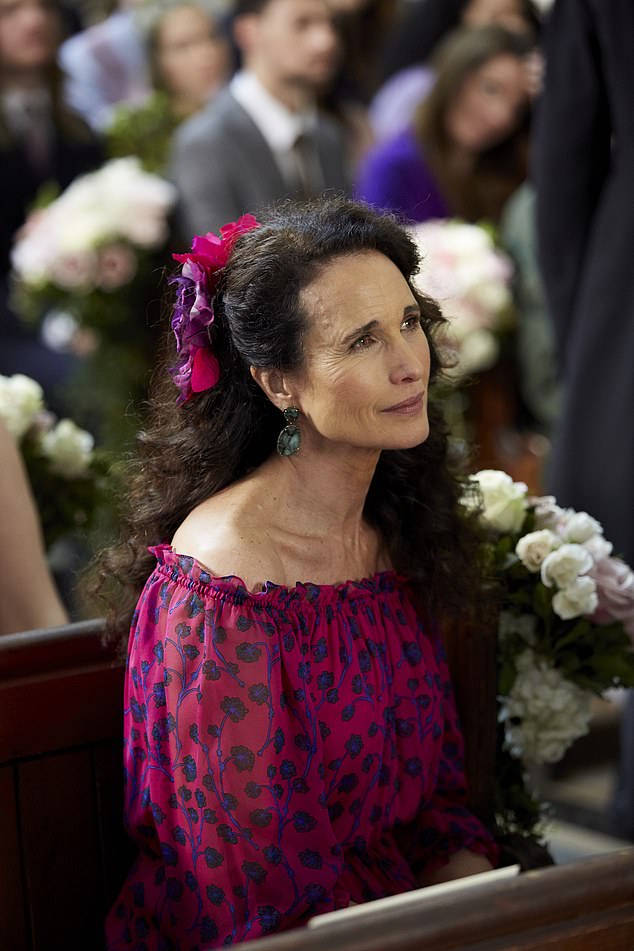 Gorgeous: Andie is seen gazing teary-eyed up at the alter in another stunning snap

Simon Callow will also be skipping out on an appearance as his character Gareth famously dies during the original film.

Four Weddings and a Funeral was made in just six weeks and cost under £3 million, but became the highest-grossing British film in history at the time, with worldwide box office takings in excess of $245.7 million.

The film was also nominated for the Best Picture and Best Original Screenplay Oscars and picked up multiple Golden Globes and BAFTAs. 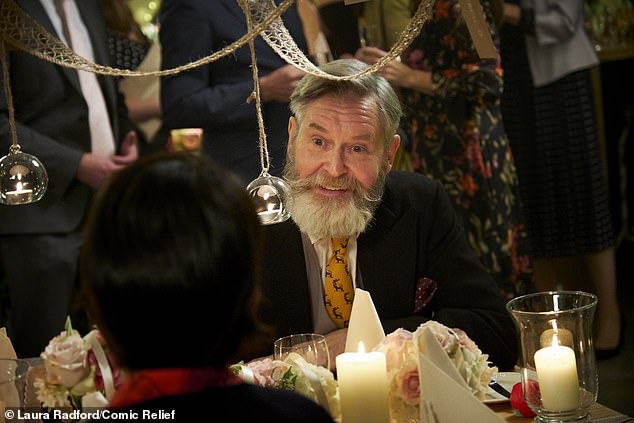 He’s back: James Fleet has returned as Tom, this time with a resplendent beard 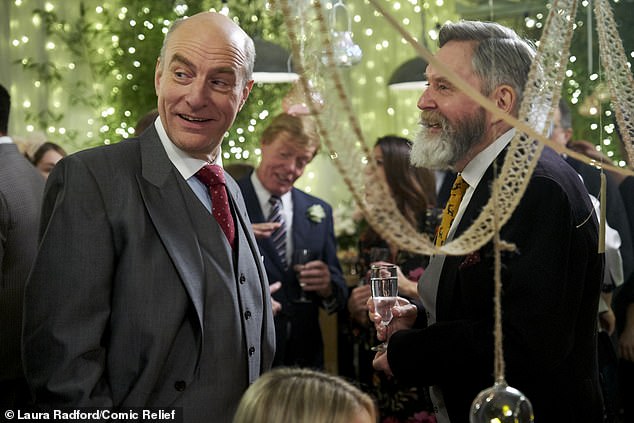 Still married? Simon Kunz is welcomed back as John, who finds out from Charles that his wife has been unfaithful during a memorable conversation in the first film 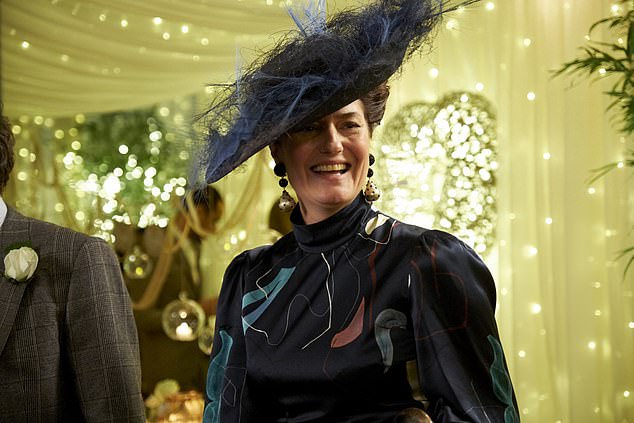 All forgiven? Anna Chancellor’s character Henrietta/Duckface has been invited to Charles’ daughter’s wedding despite him dumping her at the aisle 25 years previously 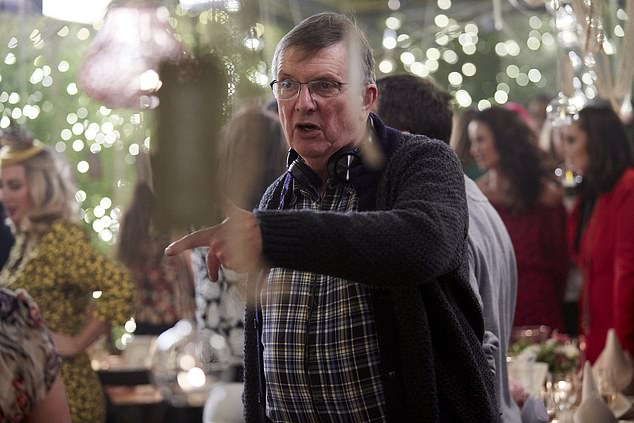 Back: One Red Nose Day and a Wedding reunites the cast of the classic romcom, along with writer Richard Curtis and director Mike Newell (pictured)

It also launched the international career of leading man Hugh, and his huge success as a romantic comedy icon.

One Red Nose Day and a Wedding follows on from the huge success of Red Nose Day Actually, a short follow up to Love Actually that premiered during Red Nose Day’s 2017 edition.

The film premieres exclusively during Red Nose Day 2019 on BBC One on Friday, March 15. It will also feature as part of NBC’s programming for Red Nose Day USA on Thursday, May 23. 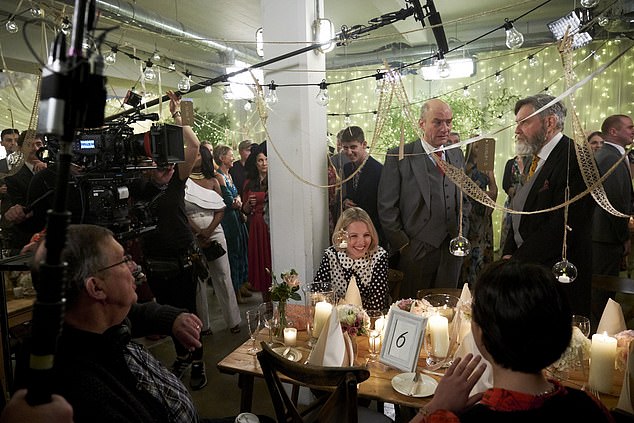 Action: The sequel was shot across one week last December. The original film was made in just six weeks and cost under £3 million 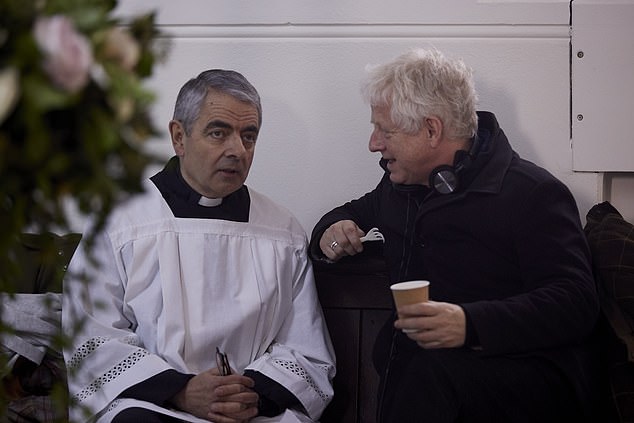 Tea break: Writer and Comic Relief co-founder Richard Curtis shared a chat with Rowan Atkinson during a break in filming 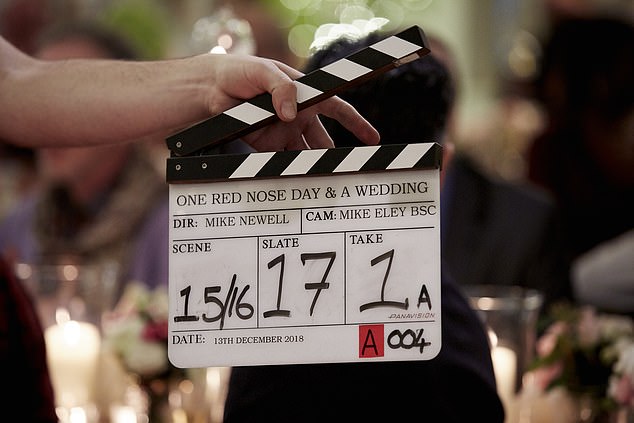 Anticipated: Fans will have to wait until Red Nose Day on March 15 for the short film