In the days before he jetted out of Sydney bound for Mexico, Karl Stefanovic, a name I have been writing about for well over a decade, agreed to a coffee date, our first in a very, very long time.

Coming straight from the gym, Stefanovic turned up at the discreet Paddington cafe having run the gauntlet of paparazzi following his every move. 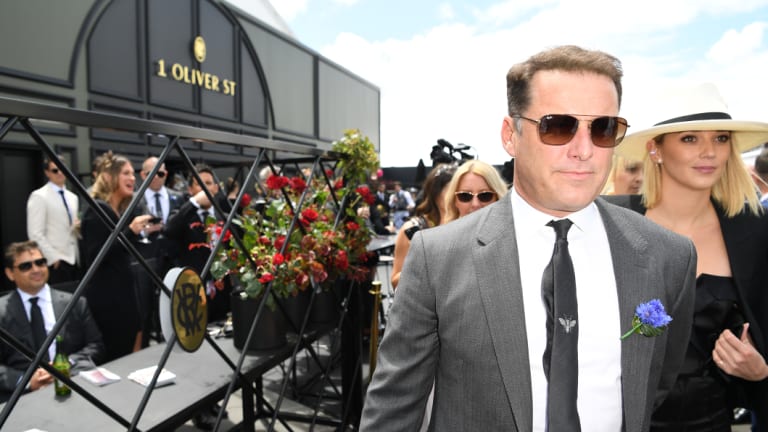 A man under intense scrutiny – Karl Stefanovic braves the crowds at the Spring Racing Carnival in 2017 with his then girlfriend, Jasmine Yarbrough.Credit:James Ross/AAP

"Jasmine just doesn't get it, like she says 'I'm not Brad Pitt," he had once told me about his then new girlfriend, shoe designer Jasmine Yarbrough‘s reaction to the media scrutiny her new boyfriend was attracting.

Neither of them were prepared for the months that were to follow.

Just an hour before we met, one of those snappers had been evicted from the fitness centre Stefanovic had been working out in. The pap had brazenly gone into the gym to get a better shot of the media personality before staff threw him out.

"It's a complete s—fight," a frazzled and somewhat defeated Stefanovic sighed.

Even his children had become targets, especially his oldest son Jackson, who at 18 and oblivious to the dark arts of tabloid journalism, had been followed around Sydney for no apparent reason.

It had been some time since Stefanovic and I had chatted. We agreed the specific content of our discussion would remain confidential, and he was clearly emotional when he spoke of the love he has for his children and his hopes for a brighter future with his new bride.

It was a sobering moment for both of us. For months, Channel Nine's "$3 million man" had gone cold on me. Stefanovic stopped returning calls and would not engage or respond to the deluge of stories being written about him.

All the while Stefanovic was being portrayed as the ultimate cad, the guy who had "suddenly" walked out on his family and wife of 21 years, Cassandra Thorburn, only to shack up with a younger blonde. 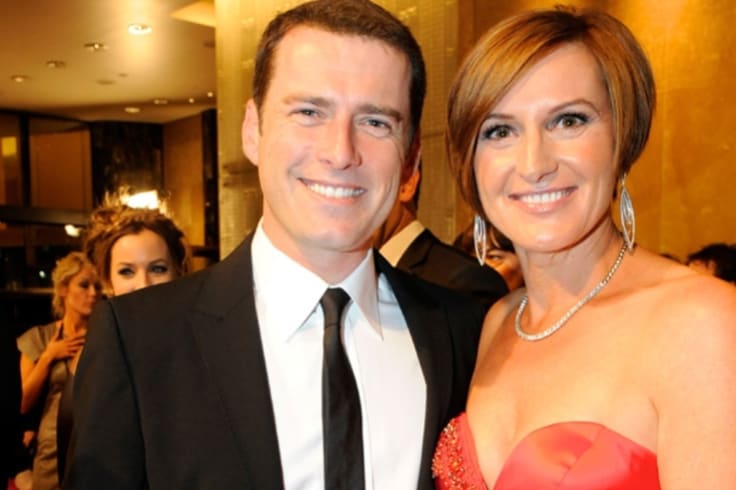 It didn't help when he was photographed kissing his new girlfriend aboard a yacht on Sydney Harbour as his ex-wife and children were preparing to move out of the family home.

And yet each morning Stefanovic would front on national television, wide smile, and attempt to carry on, though his every comment, no matter how inane or ambiguous, would be regurgitated and forensically studied on news sites for clues to what was happening in his private life.

For a gossip columnist a thick hide – or at least the appearance of one – is a professional pre-requisite.

On the day I met with Stefanovic recently, it was pretty clear his armour had taken a heavy beating.

The 44-year-old who quietly slipped into the Paddington cafe where I was waiting, ushered me to a hidden table near the storeroom far away from prying eyes and ears. This was a man who had clearly been through the eye of a storm of King Lear proportions.

And yet Stefanovic was adamant his network bosses at Nine – where he remains under contract for another two years – were continuing to back him and that he would return to his lead role as co-host of Today in 2019. But of course all that changed on Wednesday afternoon.

Television people talk a lot about the "optics" of stories, or rather how things appear to the average viewer.

But there was no denying the message received when Stefanovic, still on honeymoon in Aspen, was unceremoniously removed from his throne. His steadfast ally James Packer, who had bailed on the wedding, was there to console him. 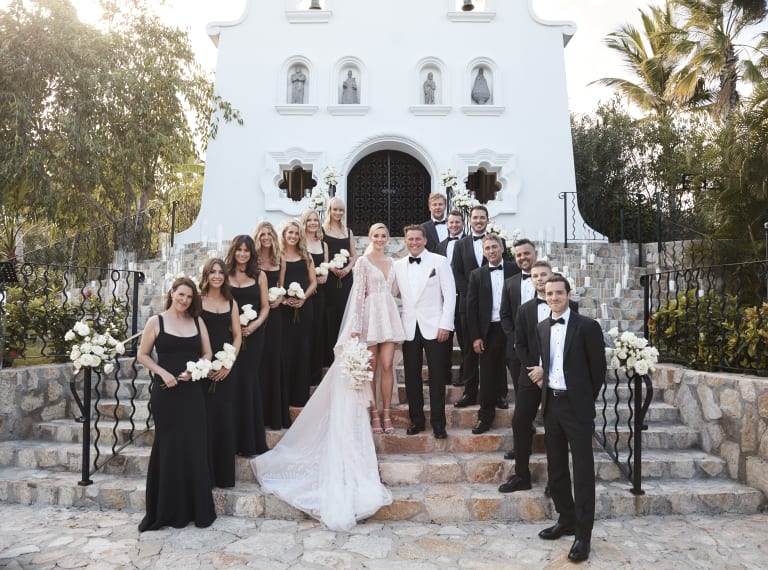 Karl Stefanovic was on his honeymoon with Jasmine Yarbrough, following their lavish Mexican wedding, when he got the call from Nine.

Stefanovic's wedding extravaganza, complete with seven bridesmaids and seven groomsmen, was intended to be a happy affair, and yet it only fuelled more bad press.

Nine's senior management was clearly unimpressed with the "optics". But their wounds were thoroughly salted when Who magazine, owned by rival media group Seven West Media, published a lavish spread on the wedding.

Stefanovic and his new bride are adamant they were not paid for the story, which they also freely shared – in various degrees – with other media outlets.

Rather Who editor Keshnee Kemp is an old friend of Yarbrough, and the young bride had invited her to the nuptials, entrusting her to do "a fair story" amid a firestorm of ugly headlines.

Sadly for them, that firestorm turned into a full nuclear meltdown this week.

Top Sydney lawyer Amanda Banton has pleaded not guilty to assault charges after PS revealed police were investigating an alleged incident at a high powered legal soiree in August.

Banton's matter is due to return to the Downing Centre on January 23.

In September, PS revealed police were investigating an "incident" that allegedly occurred on August 2 at the swanky Calyx function centre in the Royal Botanic Garden, involving two of Sydney's most successful female lawyers. 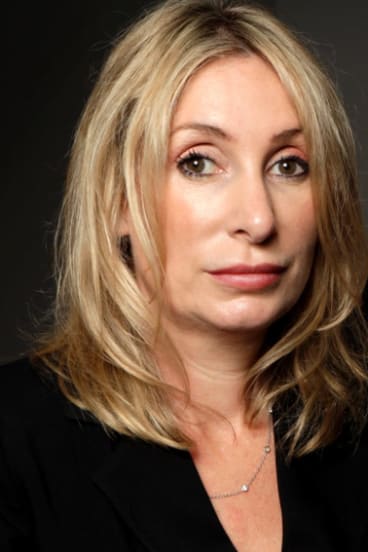 On that night about 300 lawyers, barristers and clients had converged for an annual knees-up being hosted by Banco Chambers, which counts among its luminaries prominent Sydney silk Sandy Dawson.

According to the police statement issued to PS: "A 46-year-old woman was in a function room at the Royal Botanic Garden. Police have been told during the evening another woman approached her and assaulted her. She left and police were alerted. An investigation into the incident is being conducted by officers from Sydney City Police Area Command."

The Banco Chambers party became the talk of Sydney's legal circles, especially as it has emerged that the woman at the centre of the allegation was Banton, a partner and prominent corporate lawyer at blue ribbon firm Squire Patton Boggs.

Banton is the former partner of one of Australia's biggest litigation funders Paul Lindholm who was involved in a scuffle with police back in 2010 after being caught drink-driving twice in one night.

It has since emerged that in June Lindholm agreed, without admission, to an apprehended violence order to stay away from Banton. 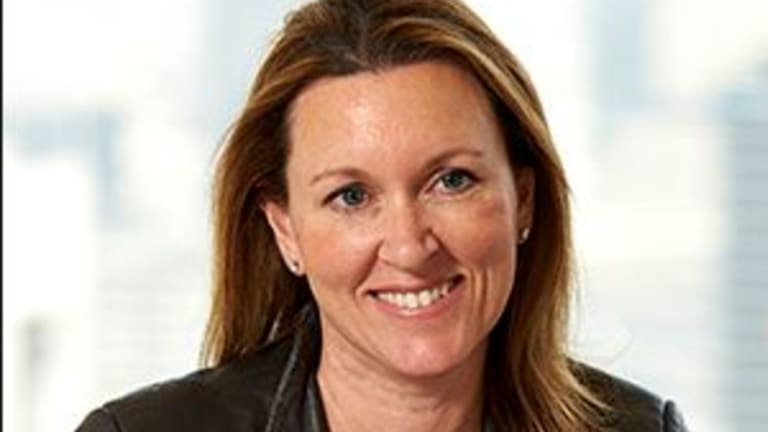 Alleged victim, Sydney lawyer Elisabeth Pickthall, due to talk at an Aspen lawyer’s conference in January.

Partygoers claimed to PS that Banton allegedly grabbed Pickthall by the throat, pinning her against a plate glass wall near an exit.

Another senior lawyer, Shaan Palmer, a colleague of Banton's and a fellow partner at Squire Patton Boggs, intervened and is alleged to have pushed Banton off Pickthall, but not before drawing the attention of many horrified onlookers.

When PS asked Pickthall in September what had sparked the incident she said: "I have no idea" and declined to comment any further. Pickthall, who left the party with two other lawyers and reported the incident to police, had previously worked with Banton.

Interestingly, PS has learned Banton intends to be in Aspen in January at the same time Pickthall is due to give a presentation at the annual Aspen Lawyers' Conference.

THE DEMISE OF SILVERCHAIR

In his new biography, The Book Of Daniel, rock music writer Jeff Apter provides some interesting insight into the demise of what was one of Australia's most successful musical exports: Silverchair. 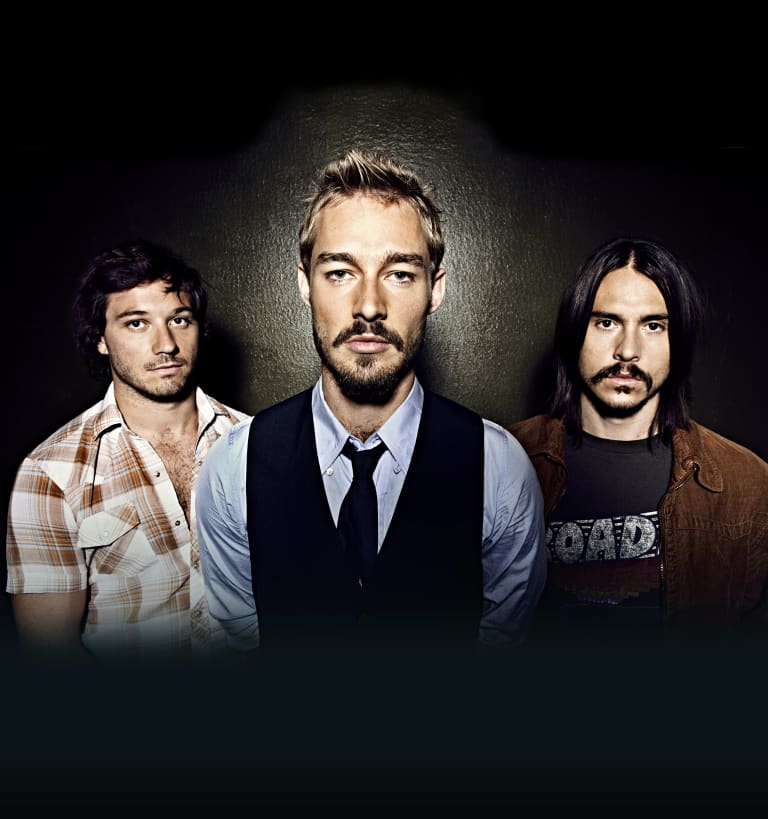 And it would appear relations between Johns and his former band-mate, Ben Gillies, remain frosty at best, with bass player Chris Joannou seemingly caught in the middle during the recording of what would have been their sixth album. 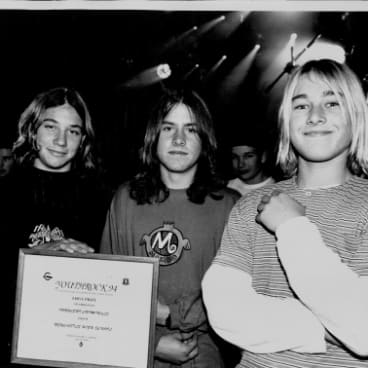 As they were in 1994, known as Innocent Criminals, fresh from winning a talent quest in Newcastle with Chris Joannou, base, Ben Gillies, drums, and Daniel Johns, lead singer and guitar.Credit:Phil Garrick

"They were long-time friends, who together had been through a million things no Newie [Newcastle] kid could ever imagine experiencing. They’d been as tight as two guys could possibly be in the pressure-cooker that was a rock band. Yet now they were clashing, in part due to the direction Johns wanted to take the band, but also about personal matters that neither has been willing to divulge publicly," writes Apter.

Since writing the book,  there were rumours Gillies' drum parts while working on the album that was never completed had been removed, with plans to have someone else play them; which became one of the final nails in the Silverchair coffin.

Twenty years after starting the band as 12-year-olds, Johns and his Silverchair band-mates announced it was the end, bringing to a close one of the most successful Australian rock band exports since INXS.

We can only presume that half the research Nicole Kidman required for her latest role as American newswoman and former beauty queen Gretchen Carlson was under her belt well before she signed on to play the role. 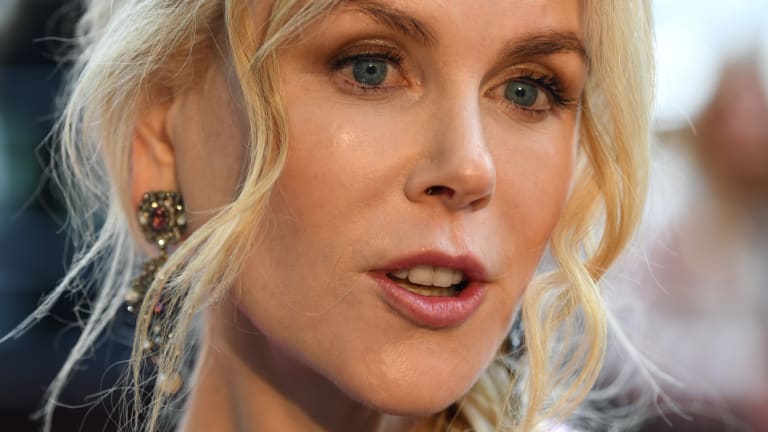 The film is actually about the demise of former American news boss Roger Ailes, who for many years was Rupert Murdoch's most trusted, right-hand-man as the CEO of Fox News in the US. 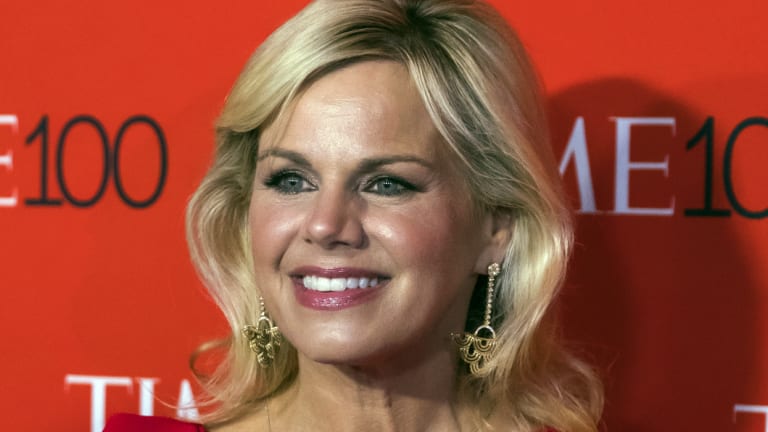 Gretchen Carlson, soon to be played by Nicole Kidman.Credit:Invision

When Carlson's contract with Murdoch's Fox News expired in 2016, two weeks later she filed a lawsuit against then Fox News chairman and CEO Ailes claiming sexual harassment. Subsequently, dozens of women stepped forward to accuse Ailes of harassment, forcing him to resign, while Carlson settled with Fox for $US20million.

Murdoch copped plenty of heat over the Ailes situation, not in the least for his comments a year ago about sexual harassment claims within his organisation, which he said were largely "nonsense". 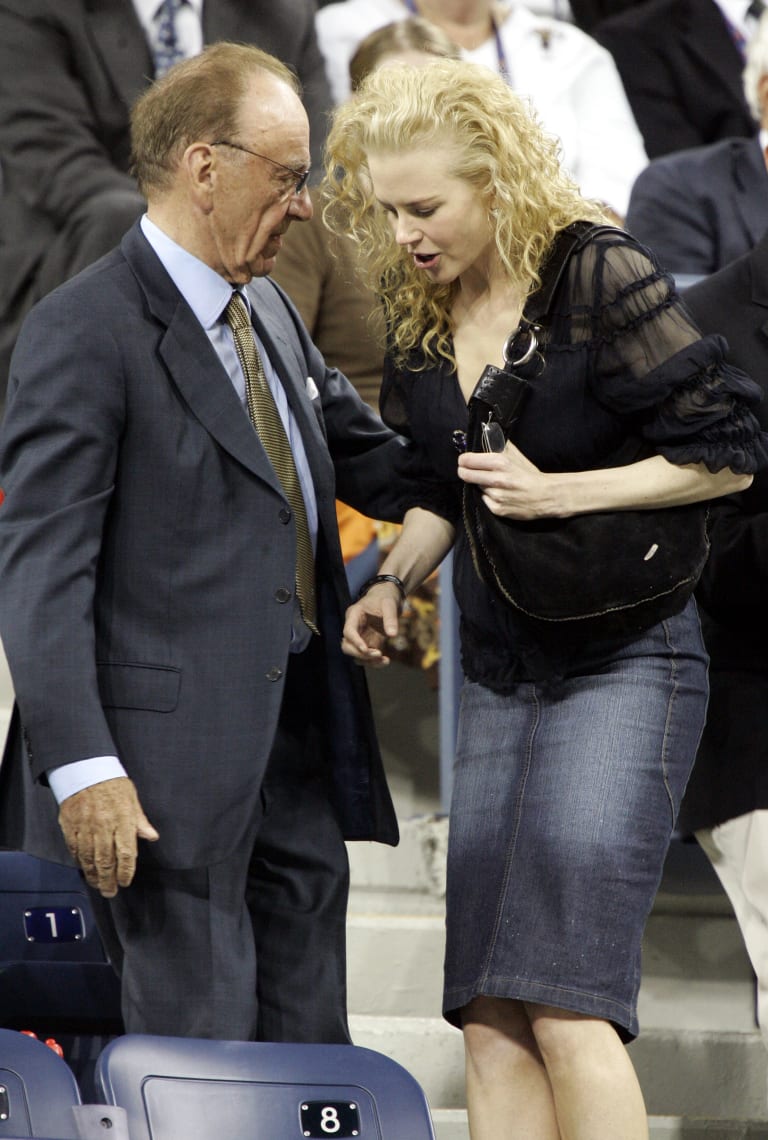 Kidman and Murdoch have been friends for many years. Pictured here in 2005.Credit:Gregory Bull/AP

"There was a problem with our chief executive [Roger Ailes], sort of, over the years, isolated incidents," he said.

"As soon as we investigated it he was out of the place in hours, well, three or four days."

Kidman's character is largely seen as the woman who brought down Ailes from his media perch.