After making a name for herself as a writer on Saturday Night Live and her first one-hour comedy special, Sam Jay: 3 in the Morning, comic Sam Jay is now changing up the late-night game with her HBO Max series, Pause With Sam Jay, by simply making a series that’s tailored to her style.

And while the format may feel radical, “I was trying to make something that felt like me,” she tells ET. “I was just trying to find a suit that fits, like, what is my way to do this late-night thing that is not going to make me feel not myself. And I felt like sitting behind a desk was just not who I am.”

But the key to what ultimately makes the show work is that Jay is just doing what feels right to her, and not hiding anything for the sake of being mainstream. “I just wanted to make something that was human and honest and felt real to me,” she says. For instance, the conversations she’s having with on the show are the same ones she’s having with her friends at home. These are “the things that we actually talk about when we hang out and have these kickbacks,” she explains, adding that most of the conversations are not about topics “being reflected in the current landscape of late night.”

In the first episode, “Coons,” that means taking a discussion she’s seen over and over again on Black Twitter to the screen while also interviewing two “pro-Black conservatives,” Olivia Rondeau and King Randall, and poking fun at Stacey Dash. “It’s something that I’ve definitely discussed with my friends on several different occasions — what that means and how does one define it,” Jay says. And while she admits that she’s “crushed on” the Clueless actress, Jay says that her multiple mentions in the premiere was also because she was the first relevant example that “popped into my head.”

What makes that episode truly shine is when Rondeau inadvertently comes out to Jay as they’re discussing what it means to be Black and conservative and if either she or Randall support LGBTQ rights. The unscripted moment truly shocked the host (“I absolutely wasn’t expecting it”), but as soon as it happened she went into mom mode. “I immediately went from shock to like, ‘Oh, she’s so scared right now.’ And I just wanted to give her a hug and tell her it’d be OK,” Jay recalls.

While being a lesbian is not all that defines Jay, it’s something she does not shy away from either, whether it’s in her stand-up routine or here on Pause. In fact, the third episode, “Let Freedom Freak,” is a prime example of what it means to be free and unashamed of one’s identity as she not only talks to Williams about his newfound career in the wellness industry but also gets him to open up about his own gay experiences while learning what it means to be a “stud with her titties out”  — and it’s truly an iconic half hour of TV.

Explaining how it came together, Jay says she found herself “having these conversations around freedom and around how we restrict ourselves in these ways. And especially as a people of color, I feel like we do that.” And after those conversations started forming the foundation for the episode, she was asked what her wall is, what is her limit in self-expression. “I was like I always kind of wanted to be one of those studs with my titties out,” she adds, noting that they allow themselves to be open, honest and vulnerable with each other in the writers’ room.

And to cap off the episode, which ends with a monologue about what it means to feel liberated and to be authentic to oneself, not only do some of her male friends try dancing around in heels but Jay goes for a topless ride around Manhattan. “It was the only way to end it. It was the only way that made sense,” she says, explaining that she couldn’t demand people to be vulnerable and not do it herself. “In the closing monologue, I’m like, ‘Do something different and push yourself.’ And how can I say that and stand on that if I don’t do it myself? You gotta be the change you want to see to some degree.” 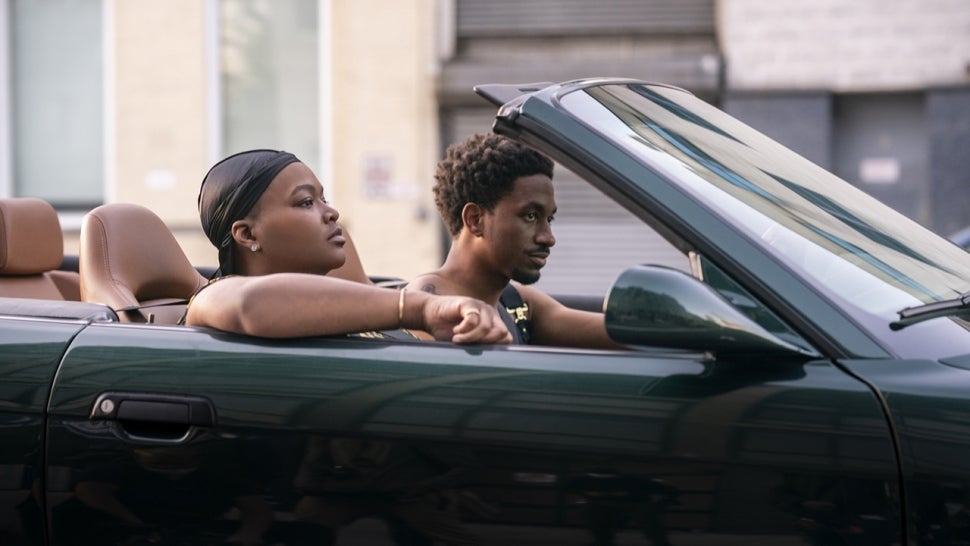 For Jay, that also means leaving a stamp on SNL, where she served as an Emmy-nominated writer for four seasons. In addition to being second Black lesbian involved with the show after Danitra Vance, she wrote notable sketches like, “Black Jeopardy” with host Eddie Murphy and “Cha Cha Slide.” “As the different writers come through and we’re putting ourselves out there, our queer identity, our Black identity, whatever identity, the table is learning. The show is learning,” she says of being part of a modern era of the long-running series that has really “evolved” over the past decade.

While she left in December to focus full-time on making Pause, Jay is most proud of one of her smaller sketches, “Neo-Confederate Meeting,” when Adam Driver keeps suggesting they all go to Vermont. “That was a little sleeper cell that got overlooked,” she says. And aside from Murphy, a host who’s had a lasting impression on Jay, she says the other one that she really liked working with during her time on the show was Jason Momoa. “He was just so incredibly kind. He was so nice and he was so excited to be there,” Jay recalls, noting “it was a reminder that it doesn’t matter how big you get, just be a good, cool person.”

If that’s a lesson she’s learned from her time on SNL, it hasn’t worn off, especially now that she’s in front of the camera. Even for audiences watching at home, they’re invited to be part of the conversation, laugh alongside her and enjoy something she’s really proud of. And on that note, “I feel like I got to make something that was genuine and pure and vulnerable and embracing of humanity,” Jay concludes.

Pause With Sam Jay is now streaming on HBO Max.