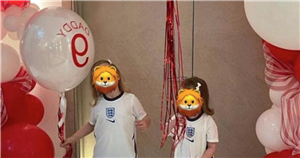 Kate, also 27, organised a massive balloon display in red and white along with some beautiful decorations to surprise her England captain husband, who had been living with the rest of the football team for four weeks.

Sharing the snaps on her Instagram posts and stories, she revealed one balloon was printed with the words “Welcome Home Daddy We Love You”.

In another shot, she showed their two daughters wearing their England shirts with pride following the Euro 2020 final.

Ivy was holding a balloon with her dad’s shirt number.

Opening up on the rollercoaster of emotions following the loss to Italy at Wembley stadium, Kate wrote a lengthy message to her 213,000 followers.

“I’m gutted,” she captioned. “Not only for Harry but for the rest of the squad and the country who have had a rough ride in the last 18 months.

“We came so close and couldn’t quite get over the line but it's been such a privilege to be a part of an amazing journey which has united the country in an incredible way.”

“Under the deflated feeling is one of overwhelming pride,” Kate continued.

“Proud of Harry, proud of how the squad conducted themselves and proud to tell my three kids about Euro 2020 and what their daddy was such a big part of.”

Kate went on to reference the vile racism and trolling that has surfaced against players Bukayo Saka, Marcus Rashford and Jadon Sancho following their missed penalties.

“As H said, racism has no place on social media or in society – you aren’t an England fan and we don’t want you,” Kate declared. “Bring on the World Cup.”

Get the latest from Harry Kane, Kate Kane and other WAGS with the OK! newsletter in your inbox every day.

England captain Harry wrote a brief but sweet and poignant reply to his beloved wife in the comments, as he shared just a pink heart and an England flag emojis.

Fans also flocked to support the family and Harry as one person encouraged: “Thank you to you and your children for lending him to us for 4 amazing weeks! We have loved the hope and happiness they gave us! Enjoy having him home. Roll on the world Cup.”

“Proud can’t wait to see the whole team back again for the World Cup, great memories from a great tournament and a great team,” another person praised.

A third person added: “They should all be so proud of where they got to! What an incredible team.”