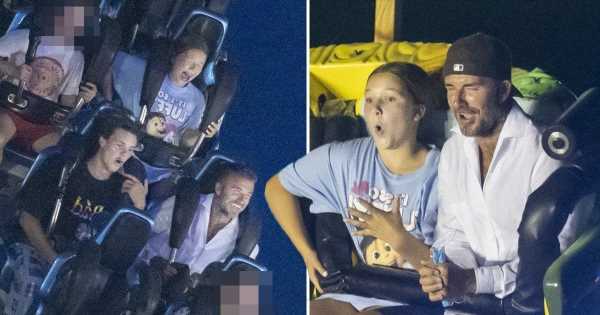 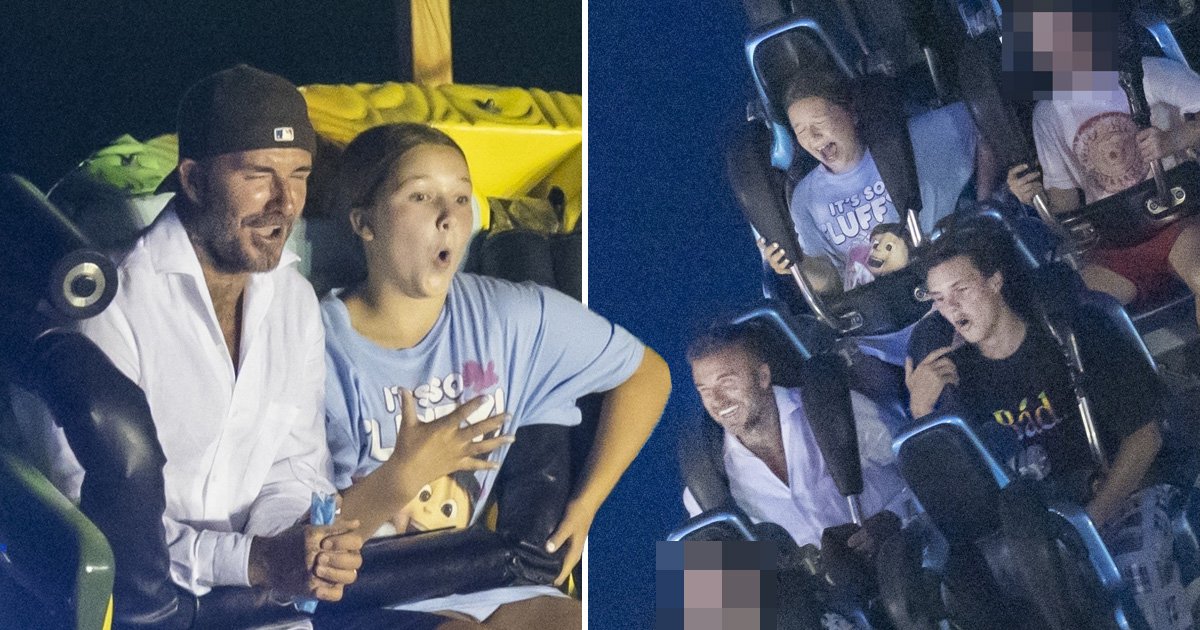 It’s safe to say Harper Beckham and her dad David Beckham looked pretty terrified as they screamed their heads of at the funfair in Saint-Tropez.

The Beckham family have been soaking up the sun in numerous destinations over recent weeks, having been spotted in Italy and now in France.

They’ve had us all green with envy, as photos have shown the famous fam topping up their vitamin D on swanky yachts and getting their adrenaline fix on jet skis.

Now, the thrill-seeking clan have been spotted enjoying a fun evening on the amusements and rides at the Azur Park funfair, along with youngest son Cruz and his girlfriend Tana Holding.

Former Manchester United legend David and 11-year-old Harper braved several rollercoasters, giggling as they were strapped in before holding on tight and shrieking their way around.

Even the dad-of-four looked pretty nervous at one point, closing his eyes seemingly in preparation for a big drop.

The sporting icon sat next to his daughter, who was clearly having the time of her life.

As for David and Harper, they blended right in with the crowds, as Harper wore a Minions t-shirt and David opted for a relaxed ‘fit of a white shirt and shorts.

It seemed a successful night all in all, as Cruz was pictured leaving holding a Stitched stuffed toy which he likely won during a game.

One person who was noticeably absent from the funfair outing was mum Victoria Beckham, but that doesn’t mean she hasn’t been thrill seeking in her own ways.

The fashion designer was been topping up her tan and splashing around in the crystal waters of Saint-Tropez, and her husband of over 20 years even got her on a jet ski.

Sharing a snap to her Instagram, the mum-of-four looked slightly apprehensive as she sat closely behind David, who beamed at the camera, seeming very proud of himself.

The former LA Galaxy player looks to have spent more time on his jet skis than on land over recent weeks, seemingly loving being a big kid and racing around in the sea.

But, when not in the water, the footie star took in the views from the yacht, donning pink swimming trunks and showcasing his extensive tattoo collection.

Eldest son Brooklyn has been missing from the family vacay, as he’s settling into married life with wife Nicola Peltz-Beckham, after the couple tied the knot in a lavish ceremony at the actress’ family estate in April.

Middle son Romeo is also away, as the 19-year-old is busy in the United States where he is playing for dad David’s Inter Miami football club.

The Beckhams were first spotted on holiday nearly two weeks ago, giving us all major travel envy as they headed out on a boat in Croatia.

David and his wife Victoria – who have just celebrated their 23rd wedding anniversary – spent some quality time with their youngest two kids on a peaceful boat trip, before venturing over to Italy and casually bumping into Duchess of York Sarah Ferguson at lunch, as you do.

Who knows where the Beckham clan will head next… but can we tag along?