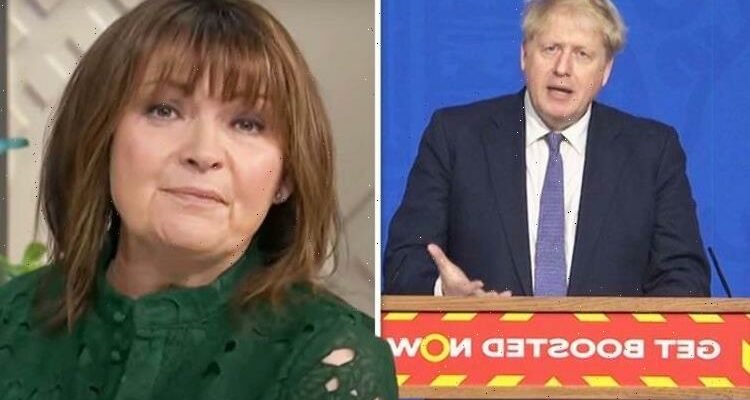 Boris Johnson says battle against Omicron 'is not over'

Lorraine Kelly, 62, was less than impressed with Boris Johnson’s on-screen appearance at this evening’s Covid press conference. The Prime Minister stood at the podium wearing a black suit and blue tie, but it was his hair that had disappointed the TV presenter.

Lorraine took to Twitter to make her thoughts known.

Sharon wrote: “Slightly cruel – we wouldn’t say that of any other person.

“Regardless of people’s personal feelings about Boris there is no need for cruel and potentially hurtful comments. I must say I’m surprised at your comment Lorraine.”

Carolyn echoed: “Would you comment in the same way on the appearance of a female politician?”

Fiona added: “I think you are slightly missing the message Lorraine.”

However, many agreed with Lorraine and joined in with her joke.

Author Giles Paley-Phillips quipped he “was thinking a spoon” rather than Lorraine’s cutlery-inspired suggestion.

RuPaul’s Drag Race winner, The Vivienne, added: “Brushed it with a toffee apple by the looks of things.”

Speaking this evening, Boris Johnson warned the UK’s battle with Covid is far from over.

He said: “Anyone who thinks our battle with Covid is over, I’m afraid is profoundly wrong.

“This is a moment for the utmost caution.”

He added: “There is no escaping the fact that some services will be disrupted by staff absences.

“But we have been working through Christmas to prepare for this wherever possible.”

The Prime Minister confirmed he would not impose any further restrictions.

He continued: “We have a chance to ride out this Omicron wave without shutting down our businesses once again.

“We can keep our schools and businesses open and find a way to live with this virus.”