Allow Gwen Stefani to reintroduce herself! The 51-year-old No Doubt frontwoman has just released a new solo song with a nostalgic lyric video.

On Monday, Stefani released her new single, “Let Me Reintroduce Myself,” sporting the same music video look she had for No Doubt’s 1995 hit, “Just a Girl.” Twenty-five years later, Stefani donned a white crop top with red-and-blue stripes and matching blue cargo pants.

In an updated twist, Stefani is wearing two gold necklaces, one with her last name and another with that of her fiancé, Blake Shelton. 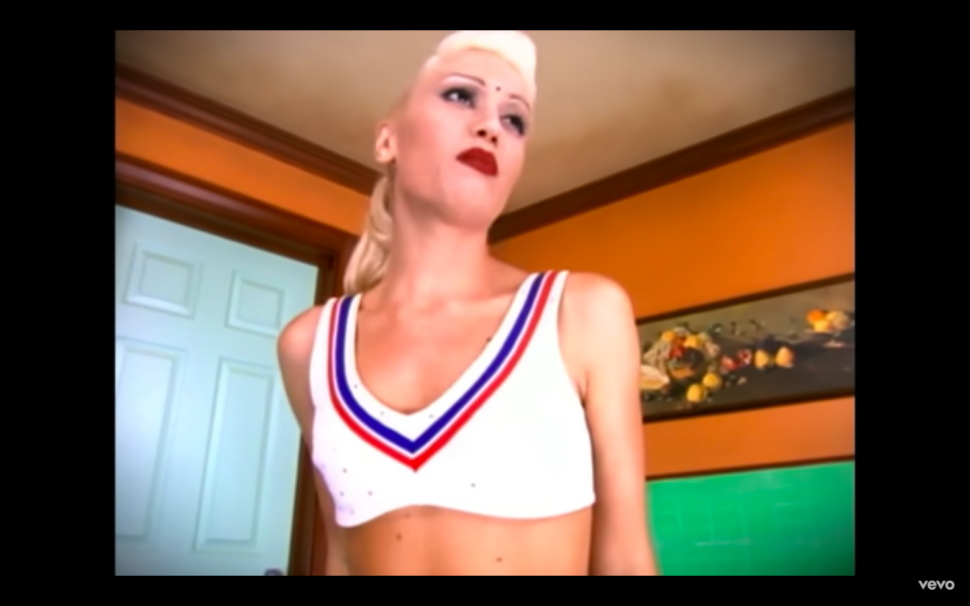 Gwen Stefani in No Doubt’s ‘Just a Girl’

The new lyric video starts by putting Stefani’s name on the screen in the same old English font used for her 2004 album, Love. Angel. Music. Baby.

In the song, Stefani sings, “The simple recipe to get the best of me/Homegrown ingredients that’s what made you mess with me in the first place ’cause you know I’m like organic and it tastes great/ I already gave you bananas.”

The lyric is, of course, referencing Stefani’s 2004 hit, “Hollaback Girl,” in which she famously spells out the word “bananas.”

The Voice judge is performing the new single on the NBC music competition show on Monday night.

Stefani opened up about her new music to The Zane Lowe Show on Apple Music, sharing that she wrote the songs during the coronavirus pandemic lockdown.

“I just was like, ‘I don’t even care if nobody hears this, I got to write some songs,'” she says. “So it was almost like I didn’t have anything to say. I didn’t think until I started writing.”

As a solo artist, Stefani has released 2004’s Love. Angel. Music. Baby, 2006’s The Sweet Escape, and 2016 This Is What the Truth Feels Like in addition to her 2017 Christmas album, You Make It Feel Like Christmas.

In a statement surrounding the release of the new song, Stefani made it clear that the nostalgic feeling of the track was intentional.

“The idea was to write a song that had a bit of a nostalgic feeling to it, so I think musically it reminds you of back in the day, going back to where I started musically which was with ska and reggae,” she says. “I’m still the same me but here’s something a little bit new in case you feel like hearing a little bit more of me.”