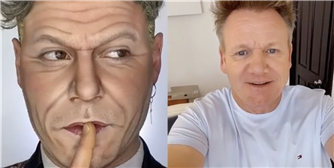 You may know Gordon Ramsay to be one of the best cooks around, but did you know he’s actually a comedian too? Well, not really, but if his adventures on TikTok are anything to go by then he’s guaranteed to give you a good laugh. Case in point, his most recent reaction to a TikToker who decided to cosplay him.

Taking to his official TikTok account on June 23, the celebrated chef and TV personality began a hilarious duet with TikToker @jammylewks by cringing at photos of himself as they quickly flashed across the screen. If his reaction to those didn’t make you laugh, the next few seconds of the duet where @jammylewks went on to create the actual cosplay look definitely will.

After seeing the TikToker draw eyebrows and wrinkles to reflect Gordon’s look, the chef said “Eyebrows? Come on, dude. Look!” while pulling the camera closer to his face and calling them flawed. Gordon then added, “Dude, that does not look like me!” moments before the big reveal.

Though the chef himself didn’t think the cosplay reflected him well, the original post—which made its way onto the social media platform in May—has amassed over 30,000 Likes. Either way you look at it, you’ve got to admit getting attention from Gordon Ramsay is a total flex.