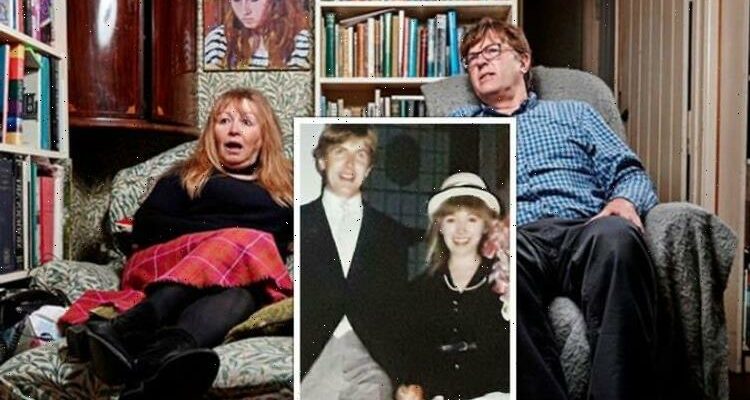 Mary Killen and her husband Giles Wood have become fan favourites on Channel 4’s Gogglebox. The loved-up couple from Wiltshire are known for their relatable tiffs, cheeky jibes and one-liners on the popular programme.

Gogglebox fans have been left thrilled after the duo shared a throwback snap of their wedding day earlier this week.

Ahead of the new series which starts later this month, the couple uploaded a sweet snap of the pair after they exchanged their nuptials, in view of their 152,000 Instagram followers.

The Channel 4 favourites showed off their quirky style on their special day.

Mary sported a white dress which she teamed with a blazer jacket and a hat.

She could be seen beaming at the camera while holding up a pink bouquet of flowers.

Giles looked dapper as he opted for a classic look of a long tail blazer with pale grey pants.

The newlyweds made their way down the stairs as they posed for the candid snap.

Fans rushed to comment on the post, as one wrote: “What a good looking couple, Mary you resemble Marianne Faithfull there.”

Another remarked: “The greatest photo of all time. I’m guessing Giles retired the very next day?”

A third wrote: “Wow. You both look amazing.”

The unseen photo comes days after the couple took to the picture-sharing site and uploaded a snippet of the couple as young adults from the 90s.

The pair looked adorable as they held hands while posing for the photo.

Giles sported a polo shirt with a striped hat and a beverage held in his hand.

The small-screen stars also confirmed their return to Gogglebox after posting the snap.

The caption read: “Nearly time for the return of #Gogglebox.”

Meanwhile, the couple shared their delight after Gogglebox scooped the prize for Best Factual Show at the National TV Awards last night.

Mary and Giles shared a photo from when they had previously attended the star-studded event.

They wrote: “Another win for #Gogglebox who just won Best Factual Show at the National TV Awards. Great acceptance speech for Sophie, Pete, Julie and Tom.”

The new series of Gogglebox is set to start on Channel 4 on September 17.