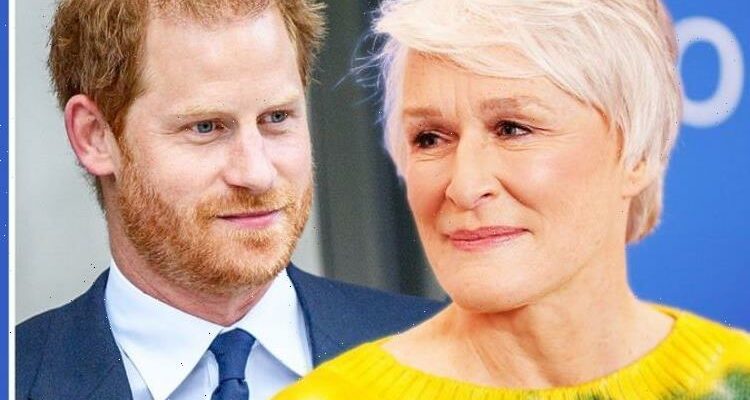 Glenn Close stars in ‘The Wife’ this evening on BBC Two. Ms Close has had an illustrious acting career, two Screen Actors Guild Awards, three Golden Globe Awards, three Primetime Emmy Awards, and three Tony Awards. She has starred in films such as the 101 Dalmatians series, and also in law drama Damages. But the star also opened up about a more difficult period in her life while appearing on Prince Harry and Oprah Winfrey’s mental health series.

Apple TV’s ‘The Me You Can’t See’ welcomed Ms Close, who discussed growing up as part of a conservative religious group.

She said this left her unable to have “successful” romantic relationships.

When Glenn was seven years old, her father Dr William Taliaferro Close became involved with a conservative new religious group Moral Re-Armament, and eventually moved his family from their home in Connecticut to live near the organisation’s headquarters in Switzerland.

She added: “I was in this group called MRA and it was basically a cult, everyone spouted the same things and there’s a lot of rules, a lot of control.

“Because of how we were raised, anything you thought you’d do for yourself was considered selfish. We never went on any vacations or had any collective memories of stuff other than what we went through, which was really awful.”

Detailing the impact this had on her mental health, the Fatal Attraction star continued: “We were so broken up. It’s astounding that something you go through at such a young stage in your life still has such a potential to be destructive.

“I think that’s childhood trauma. Because of the devastation, emotional and psychological, of the cult, I have not been successful in my relationships and finding a permanent partner and I’m sorry about that.

“I think it’s our natural state to be connected like that. I don’t think you ever change your trigger points but at least you can be aware of them and at least you can maybe avoid situations that might make you vulnerable, especially in relationships”.

Ms Close has been married three times, and described her first marriage to Cabot Wade, which happened while she was still part of MRA between 1969 and 1971, as “kind of an arranged marriage”.

Prince Harry also used the series to speak candidly about his own struggles in life, and even appeared to criticise his father Prince Charles.

The Wife: The Wife took 14 years due to sexism says Glenn Close [INSIGHT]

‘That doesn’t make sense. Just because you suffered doesn’t mean that your kids have to suffer, in fact quite the opposite – if you suffered, do everything you can to make sure that whatever negative experiences you had, that you can make it right for your kids.’

He also accused the Royal Family of “total neglect” and said “life was a nightmare” when his relationship with Meghan Markle became public.

The Duke of Sussex said he and Meghan were “followed, photographed, chased and harassed” within days of their relationship becoming public.

He continued: “I felt completely helpless. I thought my family would help – but every single ask, request, warning, whatever it is, just got met with total silence or total neglect.

“We spent four years trying to make it work. We did everything that we possibly could to stay there and carry on doing the role and doing the job.”