George Clooney is revealing his surprising skill. The 59-year-old actor covers the Feb./March issue of AARP The Magazine, and, in the accompanying interview, discusses the things he’s been doing around the house he shares with his wife, Amal Clooney, and their 3-year-old twins, Ella and Alexander, to keep busy during quarantine due to the COVID-19 pandemic.

“I wood stained the entire interior, exterior, and all the furniture of the house. All of it. It was getting dingy, and I had buckets of stain, and I was, like, ‘Well, what else am I going to do?’ It made me feel better,” he says. “And I put chicken wire all around the dog yard.”

“I do a lot of sewing the kids’ clothes and my wife’s dress that tore a couple of times,” Clooney continues, after revealing that he also spent time rewiring his assistant’s sewing machine. “I was a bachelor for a long time and didn’t have any money, and you have to learn how to repair things.”

All of his skills, Clooney thinks, make him an ideal choice for any survival scenario.

“If we were on an island and you had to pick somebody to help you survive, I would pick me,” he quips. “Ask all of my friends and they would pick me, too. I can make a waterspout out of this and a pitcher out of that.”

While Clooney’s certainly varied in his skillsets, that doesn’t extend to social media know-how.

“I’m intimidated by anything on the internet,” he admits. “Like, if I push a button and something goes wrong, I panic. I’m a Luddite when it comes to that.”

Clooney’s distaste for social media was furthered after his serious, 2018 scooter accident, when people took photos at the scene of the crash, rather than helping him.

“I’m not a cynical guy, but I will always, always remember that moment, because nobody was jumping to go call for help or coming to help. For them the worst moment of my life was entertainment,” he says. “People are getting killed because they’re taking a shot of a car crash coming toward them. We’re living in this world where everybody is trying to make themselves fascinating or important or something. When the reality is: Put that phone down.”

His perhaps old fashioned sensibilities seep into his private life, down to his kids’ classic names.

“I have an advantage because I’m so much older that by the time my son would feel competitive, I’ll literally be gumming bread,” Clooney jokes.

With the arrival of the twins, Clooney and his wife started the tradition of writing them yearly, dated letters to mark a specific moment in time. The couple likewise pens letters to each other.

“I have letters from Paul Newman, Walter Cronkite, Gregory Peck. I have them framed. I put them in the house,” Clooney continues. “If it were a text, it would feel different. Maybe that’s a generational thing, and maybe it won’t be that way 20 years from now, but for me, somebody sat down and wrote it.” 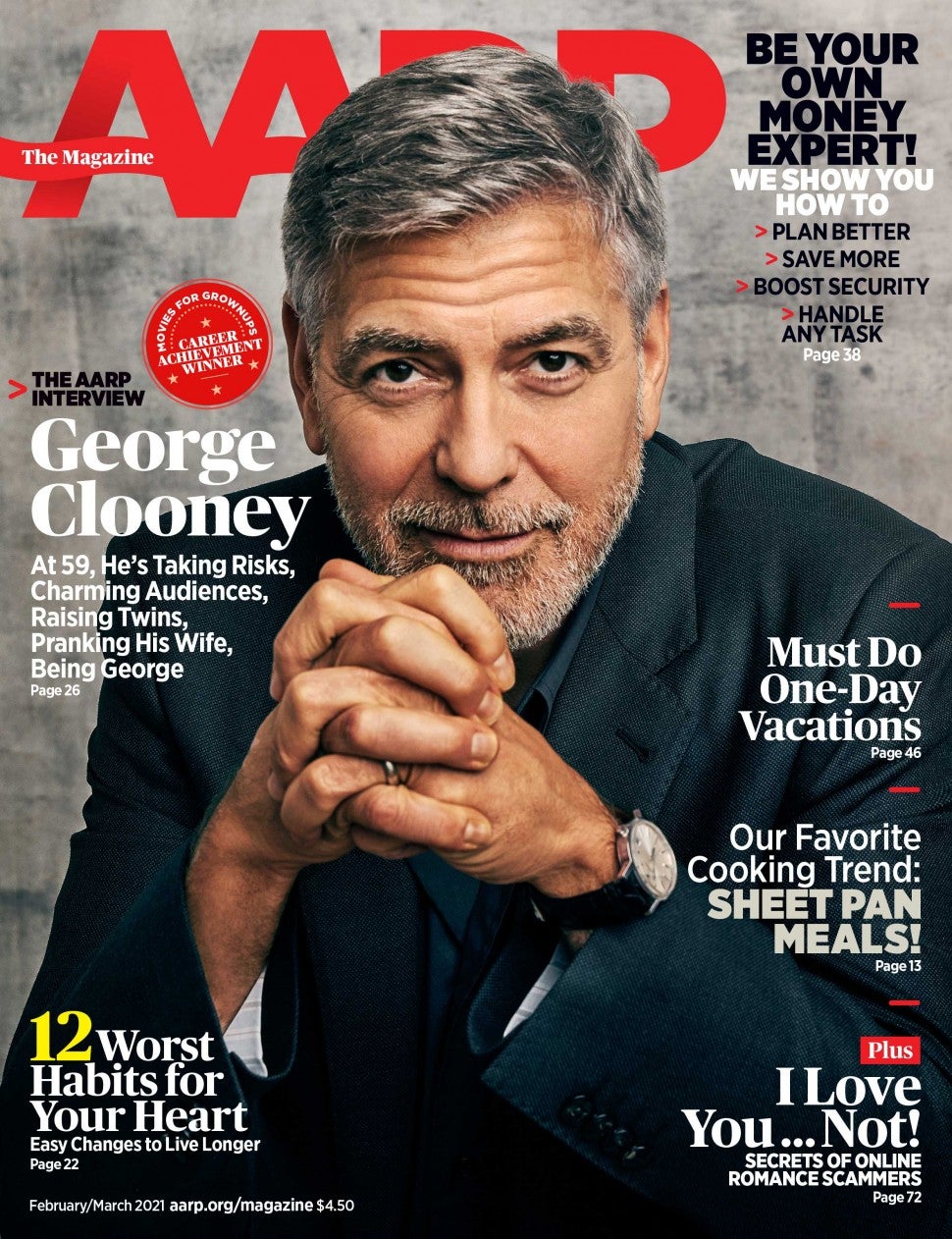 As he approaches his 60th birthday, Clooney isn’t concerned with aging, at least not yet — “Seventy will be more of a shot to the throat. I’m telling you, 70 will f**k me up,” he admits — but he is curious about what comes next.

“I’m not a particularly religious guy. So I have to be skeptical about an afterlife. But as you get older, you start thinking, ‘Well, wait a minute.’ It’s very hard for me to say, ‘Once you’re finished with this chassis that we’re in, you’re just done,'” he says. “My version of it is that you’re taking that one one-hundredth of a pound of energy that disappears when you die and you’re jamming it right into the hearts of all the other people you’ve been close to.”

Now, though, Clooney is as young at heart as ever.

“Yesterday, I taught Alexander to take a piece of banana, chew it up and then spit it into a napkin. Then stand next to his mom, pretend to blow his nose into it and look down until Mama looks at it. Then eat it,” Clooney shares. “It’s just outrageously fun.”

Clooney is this year’s recipient of AARP The Magazine’s Movies for Grownups Awards Career Achievement honor. The ceremony will be broadcast by Great Performances on PBS, Sunday, March 28 at 8 p.m.

For more with Clooney, watch ET’s exclusive interview with him where he further talks about fatherhood and turning 60 in May.