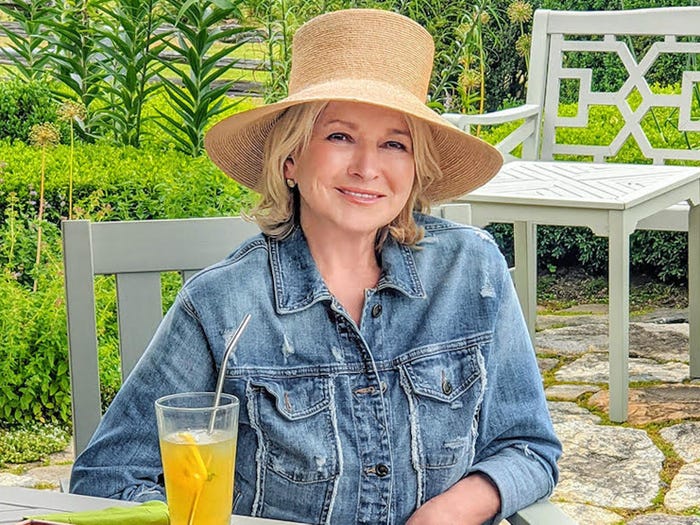 Martha Stewart is a lot of things — a celebrity chef, a "thirst trap" expert, and a big fan of CBD gummies, to name just a few. But not everyone is aware that she was also once a billionaire.

Speaking with People magazine, the 79-year-old lifestyle guru talked about her early days working as a model and then a stockbroker before building her lifestyle empire.

The home living expert also spoke about the day in 1999 when her company, Martha Stewart Living Omnimedia, went public and rapidly tripled in value before closing time. This earned Stewart a windfall and, as she reminded us all in the People interview, made her the first self-made female billionaire.

Stewart previously spoke about her company's massively successful IPO day in a 2016 interview with Business Insider.

"That was a great day," she told Insider. "I drove up Madison Avenue after the offering. I was an instant $1.6 billionaire."

She also recalled feeling like she could "buy anything on [the] street" known for its high-end retailers, but that she was "too busy working" to stop and go shopping.

Though Stewart is no longer a member of the billionaires club, she's still plenty wealthy. Forbes last calculated her net worth to be about $550 million in 2007, while more recent estimates put her fortune closer to $400 million.

Stewart may have been the first self-made woman to reach billionaire status, but she certainly wasn't the last

Oprah Winfrey, another lifestyle icon, became a billionaire just a few years after Stewart, in 2003. And another of Stewart's successors is reality TV star and cosmetics guru Kylie Jenner, though Jenner's billionaire title has since been revoked.

But in May 2020, the magazine recalculated Jenner's net worth and announced that she's not a billionaire after all, citing new information they say revealed the value of Kylie Cosmetics was actually a lot smaller than they'd thought when her net worth was calculated in 2019.

In her interview with People, Stewart recognized that she has endured some tough times, both personally and professionally

Stewart touched upon her endurance and her strength in getting through her five-month sentence in the Alderson Federal Prison Camp in West Virginia, calling herself "very strong" and "very motivated to get on with life." But even before her prison sentence, the celebrity chef faced challenges as she built her company from the ground up.

"I had opposition, and that kind of opposition to a woman-built business was really outrageous," she said. "Even my own lawyers were negative about the possibility of success. I remember one lawyer sending me an orchid, saying, 'Oh, you did it. Wow. What a surprise.' What a piece of garbage that guy is."

Despite these setbacks, Stewart is aware that she serves as an icon and an inspiration for other would-be self-made female billionaires.