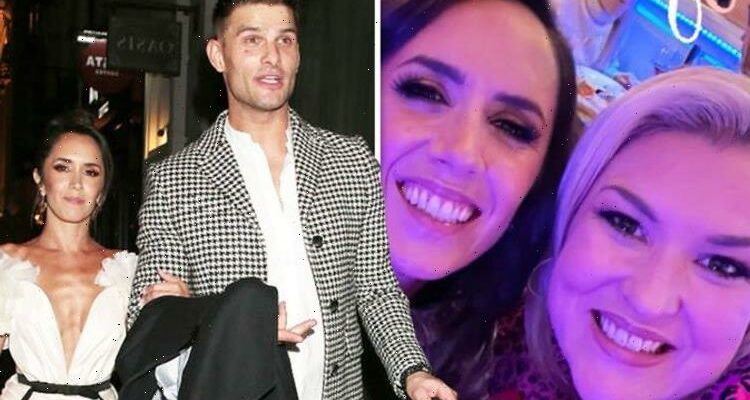 Pride of Britain: Janette Manrara reveals who she thinks can win Strictly

Janette Manrara, 37, and Sara Davies, 37, had a “girls night out” minus their respective husbands last night. The Dragons’ Den star is partnered with the former’s spouse Aljaz Skorjanec, 31, in the current series of Strictly Come Dancing.

The entrepreneur admitted she “felt bad” after she encouraged the professional dancer to not join the pair for dinner.

Taking to Instagram, Sara shared a cheeky message in view of her 123,000 followers.

The Strictly contestant admitted Janette’s other half is a “sweetheart” after he paid the pair’s bill, despite not dining out with them.

“That me and Janette decided to have a girls night out and not only didn’t invite Aljaz but we actually encouraged him not to come along so we could enjoy our ‘girl time’ or that he turned up after the meal to pay the bill and sort out our taxi home!

“He is such a sweetheart I can’t even begin to tell you!”

The businesswoman later took to her Instagram stories to share some photos from her night out with Janette.

“Felt bad for not inviting Aljaz but actually encouraging him not to come so we could have some girly gossip time!”

But it didn’t take long for the Strictly pro to gatecrash their get together, as Sara shared a snap of the trio together.

She wrote: “Then I felt really bad when we asked for the bill, only to be told it had already been taken care of – and Aljaz saunters over, after he’s been sitting in the corner of the restaurant for half an hour not wanting to interrupt us as we looked deep in conversation (which we were!).”

Their date night comes after Sara and Aljaz joined Janette in yesterday’s episode of the Strictly spin-off show It Takes Two.

In a previous interview, the Dragons’ Den star said that the Strictly host urged her to build on-screen chemistry with Aljaz.

“Janette gave me a right talking to about it,” Sara explained during a recent instalment.

“She said, ‘Look Sara, you’re going to have to look into his eyes and imagine that my husband is actually your husband and imagine it’s Simon and dance it like it’s him’.

Janette addressed her previous comments and explained she meant nothing more than improving their performance.

“Yes, you are doing the rumba, so she has to look at him like he’s her own husband, they’re telling a love story, and that song means a lot to her and it always reminds her of her husband,” Janette explained.

“I told her, ‘For the dance, you need to take him, he’s yours’. And they did really well.”

Strictly Come Dancing airs tomorrow on BBC One at 6.45pm.