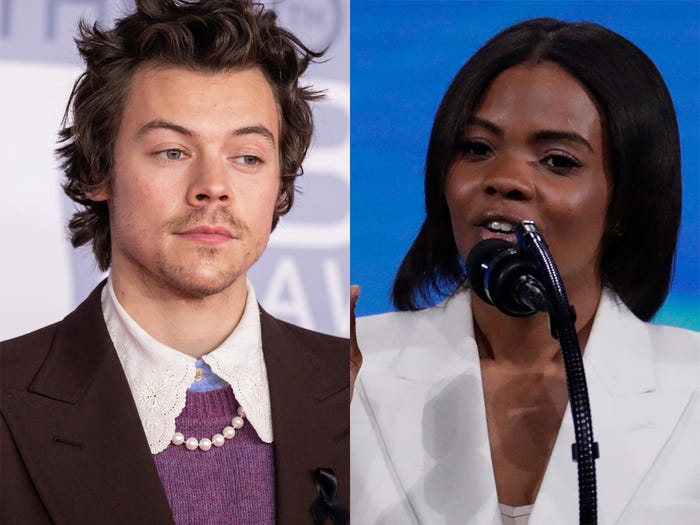 Harry Styles' fans are continuing to support the singer after conservative commentator Candace Owens stands behind her criticism of the way he dresses.

On Wednesday, Styles posted an image from his new photoshoot for Variety as part of his cover story for the publication's 2020 Hitmakers issue.

In the photo, taken by Parker Woods, the 26-year-old "Fine Line" singer was seen biting into a banana while wearing a custom-made blue suit with frills from Palomo Spain.

The caption was a jab at Owens, who recently criticized Styles after he posed in a blue gown by Gucci for the December 2020 issue of Vogue.

Following the issue's release in mid-November, Owens called the cover "an outright attack."

"Bring back manly men," she added.

Speaking to Variety, Styles stood behind his gender-fluid fashion sense, saying:  "To not wear [something] because it's females' clothing, you shut out a whole world of great clothes."

"And I think what's exciting about right now is you can wear what you like," he continued. "It doesn't have to be X or Y. Those lines are becoming more and more blurred."

"When people try to tell me I don't have influence, and then @Harry_Styles dedicates an entire post to my tweet. I inspire global conversation. #BringBackManlyMen Shots fired," she tweeted, adding a screenshot of Styles' Instagram post.

She further commented on the singer's latest look in several videos on her Instagram story. While she said she was "digging it" and it's preferable to his last one as it "doesn't look feminine," she also said, "he looks stupid."