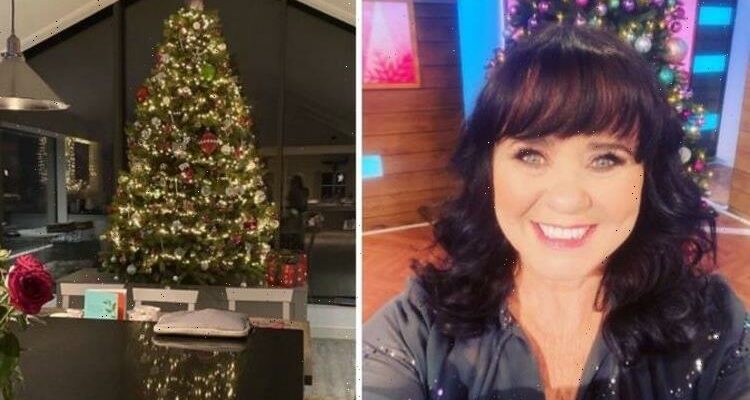 56-year-old Loose Women presenter Coleen Nolan will be unwrapping her gifts this year with both a mystery partner she met on Tinder, and her ex-husband Ray Fensome.

While it might not work for everyone, for the sake of her 20-year-old daughter Ciara, Coleen intends to keep everyone together for one of the most important family occasions of the year.

I feel like the best thing since sliced bread!

Formerly one fifth of the classic girl group The Nolans, in which she sang with her sisters, Coleen is a much-loved showbiz personality and has now shared a candid insight into her personal life ahead of the festive season.

“[My new Tinder boyfriend] is lovely,” she gushed, “and he’s going to be spending Christmas with us.

“He’s met all the kids and family, and Ray – and everyone gets on.”

This must have been a relief for Coleen, as she revealed Ray had jokingly threatened beforehand: “I can’t wait to meet him and tell him what a d******* you are!”

However, she remained tight-lipped about the mystery man’s identity, admitting in an interview with Woman’s Own: “It’s early days, and I just want to keep it to myself for now.”

Her relationship with Ray ended on amicable terms, with the pair remaining “good friends” while co-parenting their daughter Ciara.

It comes after Coleen revealed Ciara was the one who persuaded her and Ray to split up.

“She said to me, ‘Mum – I love you and I love Dad, but don’t stay together because of me. And I can’t stand both of you slagging each other off,'” Coleen confessed.

In that moment, she realised Ciara had been “the glue that held us together” – and that, with her blessing, they could finally end their 11 year marriage.

Prior to her life with Ray, Coleen had been wed to actor Shane Richie and the pair had two sons – Shane, 32, and Jake, 29.

Meeting the mystery Tinder man and finding love again has marked the end of a string of meet-ups with potential suitors, which saw her joke to New magazine that she’d become a “professional at dating”.

She even reported that she’d been dumped in the early stages of a previous romance by a man who couldn’t handle her fame.

However her new partner, whose identity may be revealed soon, has made her feel “like the best thing since sliced bread”.

She also claims that he makes her feel the same age as her daughter again.

Coleen has recently struggled with heartbreaking situations in her family, due to devastating health issues.

Last year, her sisters Anne and Linda were both handed cancer diagnoses by their doctors within days of each other – and cancer has been such a common occurrence in the Nolan family that they have dubbed themselves the Chemo Sisters.

Coleen was also left distraught when her sister Bernie died of cancer eight years ago.

The same fate was handed to The Nolans’ tour manager Brian Hudson during her career, and he eventually died of liver failure.

In spite of all the ups and downs, it seems Coleen is more determined than ever to make Christmas Day a special one this year