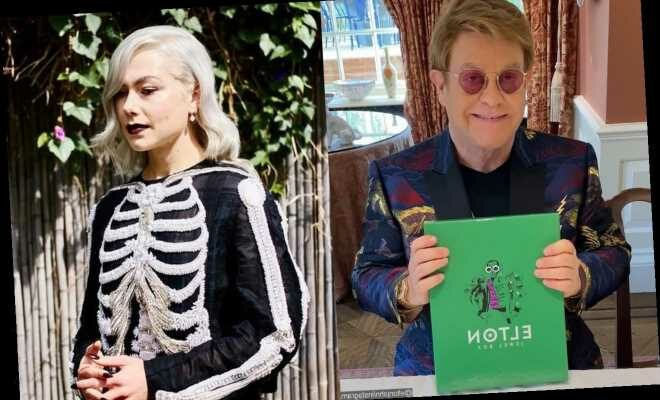 Prior to the award-giving event, the music icon invited the ‘I Know the End’ singer, who didn’t win despite being nominated for four categories, to his podcast ‘Rocket Hour’ to talk about the show.

AceShowbiz -Everyone who planned to attend Grammys after-party might want to avoid Elton John. Prior to the award-giving event, the music icon invited nominee Phoebe Bridgers to his podcast “Rocket Hour” to talk about the show.

Making it clear that he’s rooting for the “I Know the End” singer, Elton told Phoebe in the episode, “If you don’t win at least one, I’m going to hit someone, OK?” Unfortunately, Phoebe, who was nominated for four categories at this year’s Grammys, went home empty-handed at the event on Sunday night, March 14.

Twitter quickly errupted with jokes and memes after the results were announced at the Trevor Noah-hosted show. “phoebe bridgers didn’t win the grammy someone keep an eye out on elton john,” one person tweeted. The post gained more than 3.2k retweets and almost 3k likes on the blue bird app.

Another viral tweet featured a video of someone losing control of his own car. “elton john on his way to beat up everyone at the grammys because phoebe bridgers didn’t win,” read the caption of the post which has been liked by more than 5.4k users. “i want my friend to win a Grammy but I also want to see Elton John beat someone up,” one other user chimed in.

“phoebe was robbed but like not at the same time because fiona and meg are just so amazing but at least now we get to see elton john turn violent,” someone else wrote. “guys i’m so sorry i didn’t give phoebe bridgers an award elton john please don’t hurt me,” someone else joked.

Phoebe herself poked fun at the fact that she was being shut out at the annual award-giving event that celebrates music’s best. “stop the count,” so she wrote on her Twitter page on Sunday night, referring to the voting counts for Best New Artist category. After it was announced that Megan Thee Stallion was the winner, Phoebe went on to write, “jk megan you’re a f***ing legend.”