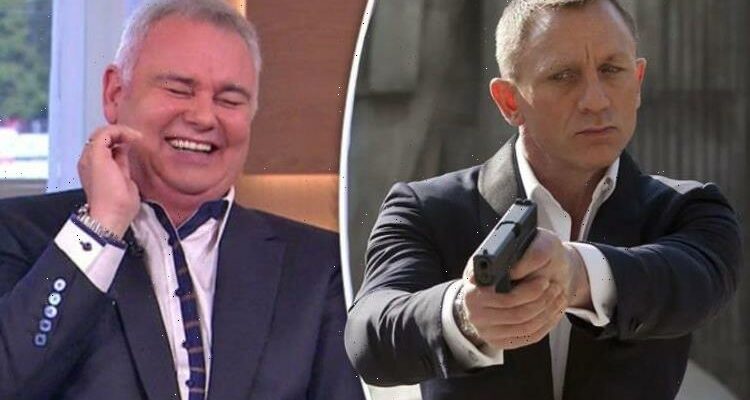 Eamonn Holmes, 61, was stunned that his name appeared in the running for the next James Bond. It comes after the release of Daniel Craig‘s last ever film, No Time To Die premiered across the country, leaving many still wondering who will be taking on the iconic role next.

After a fan took to Twitter to share a screenshot of a wager that put Eamonn at 500/1 to be the next 007, the This Morning star couldn’t contain his giggles.

Eamonn soon replied with a screen of smiling emojis: “Even I laughed!”

His response sparked another discussion in the comments section about who would be his fellow cast-mates if he defied all odds and did become the next legendary spy.

“So if you were #Bond, doesn’t that mean that @RuthieeL would of course have to be Miss Moneypenny?” one user wondered.

The presenter cheekily typed back: “More likely The Villain,” alongside a mouth covered face.

Of course, some asked Eamonn what his verdict was on the hugely-anticipated latest film in the franchise, to which he responded: “It’s not really a typical Bond film but it is very good.”

The top six actors currently in the running for 007 are Lashana Lynch, who clashes with the shared 007 title in the new film, Tom Hardy, Idris Elba, Henry Cavill, Regé-Jean Page and Tom Hiddleston, but no decision or announcement has been made as of yet.

Elsewhere, away from the goings on of the fictional MI6 character, Eamonn recently opened up about his father’s death in a candid interview about his career.

Addressing his health, the ITV star admitted there was a moment he thought he’d die of a heart attack, just like his dad.

The broadcaster opened up to Joe Duffy in his RTE series The Meaning of Life, revealing he started to suffer panic attacks after his dad died suddenly in 1994.

He passed away from a heart attack, which the presenter called “traumatic”.

At the time, Eamonn was also struggling with work after losing a job in Manchester, and one day passed out.

He found himself in the back of an ambulance and spent the night in hospital.

After doctors carried out tests, they determined the broadcaster was suffering from anxiety.

Back in 2018, he bravely told his story on This Morning, where he told viewers: “I’ve had a number of panic attacks, thank goodness all 27 or something years ago now.

“I would never have associated it with a mental problem.

“I think looking back at it, it was the result of the sudden death of my father and not being able to say goodbye to him.”

Eamonn then added about how it once happened when he was on-air, saying: “It happened once on-air and it doesn’t get much worse than that; trying to cover it up.

“Both times I was hospitalised from it, but yet it’s never come back.”